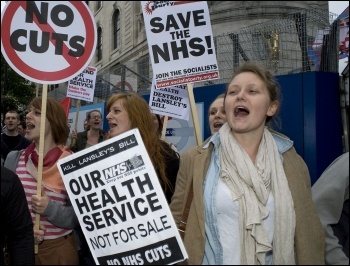 The National Health Service (NHS) is being broken apart by the hammer blows raining down on it from the Con-Dem government. Huge job cuts and closures of hospital wards and departments, including Accident and Emergency, are wreaking havoc. On top of this, the widely criticised Con-Dems' Health and Social Care Bill will accelerate the privatisation process in the NHS.

How the NHS is being undermined:

Mass action can save our National Health Service - TUC call a demo now!

"A hand grenade thrown into the health service" - when a Tory MP uses these words to describe the Health and Social Care Bill it must be unpopular! When the latest revelations include, for example, attempts to make cuts of £370 million a year across four hospital trusts, a planned 24% reduction over five years, it is hardly surprising.

Tory Health minister Andrew Lansley is a bully trying to force his hated bill into law, falling back on the argument that much of it is already established fact. Writing in the Guardian Polly Toynbee points out that: "The new national commissioning board already has a chief executive and finance director with seven board members recruited on salaries of up to £170,000 before the bill is passed." Profiteers already have contracts to run services for GPs and so on and so forth.

As the Socialist goes to press the government is attempting to suppress the findings of a report of the likely risks attached to the bill. According to Labour blogger doctor Éoin Clarke: "The chief warning in the report is that Lansley's reforms will spark a surge in health care costs and that the NHS will become unaffordable as private profiteers siphon off money for their own benefit. The report specifically warns that GPs have no experience or skills to manage costs effectively."

Polly Toynbee also points out, as others including socialists have done, that the opening of every corner of the NHS in England to "any qualified provider", ie root to tip privatisation, will destroy the cooperation required for a national service. "Stroke care surged ahead by creating pathways so ambulances take patients to designated units, open on rota, working together. Cancer and heart results improved dramatically, due to collaboration. Commercial competition prevents that - and drains away cash."

Part and parcel with this profiteering are the enormous cuts. £20 billion of so-called savings planned since 2010 are ravaging the NHS.

But resistance is growing. Health workers' trade unions and organisations, including the British Medical Association, the Royal College of Nursing and the Academy of Medical Royal Colleges, with members numbering hundreds of thousands have come out against it.

Given that what is posed is the total destruction of the NHS this is not surprising. Even a survey by relatively wealthy governments in the OECD recognises the NHS as one of the world's best health systems that has been improving patient care for years.

Labour leader Ed Miliband is opportunistically attempting to claim the mantle of hero of the NHS but has no effective strategy to defend the biggest reform ever won by the working class in Britain.

"Now is the time for people of all parties and of none, the professions, the patients and now peers in the House of Lords to work together to try to stop this bill." But disability rights campaigners can explain how far opposition in the Lords got them in the campaign to oppose the vicious Welfare Reform Bill. MPs thanked the Lords for their amendments and ignored them, passing that bill up for royal assent, effectively making it law.

Like the bashing of bankers' bonuses Miliband has hit on a rich seam of anger among working class people. But Miliband and his party are not against all 'reform'. He has described Labour's reforms "including using the private sector where appropriate" as the reform the NHS needs. Labour is a big business party which, when in power for 13 years, went very far in preparing the ground for Lansley's bill through massive PFI privatisation and marketisation of the health service.

In 2006 anger at these attacks on the NHS sparked a large movement which saw hundreds of thousands participate in big demonstrations in towns and cities across the country. In fact it was probably this 'uprising' in some of the Tory heartlands that prompted the opportunist election focus on the NHS by the Tories in 2010 as they made a bid to detoxify the 'nasty party'.

Again there is a now huge mood for action to save the NHS but unfortunately so far this has not been provided with a leadership. The trade union leaders have not called a mass demonstration in defence of the health service which, if it was properly built for around clear slogans and an on-going programme of struggle, could get a phenomenal response, given the mood of rage on the issue. An indoor evening lobby in March is not sufficient. The Socialist Party calls for a massive Saturday demo as a start of a determined united campaign to save and rebuild our NHS, with trade union strike action at its heart.

A Guardian editorial said: "It is hard to think of a starker failure in domestic government since the poll tax." Comparisons with the poll tax are apt. It provoked the biggest mass participatory movement in recent decades. Eighteen million people took part in a campaign of mass non-payment which removed the hated and unfair tax from law and brought down Thatcher with it, seeing the Tories off for over a decade.

There are other valuable lessons from this movement. Then also working class people could not rely on right-wing Labour and trade union leaders to provide a leadership. That was provided by Militant, the forerunner of the Socialist Party.

It also made it absolutely clear that working class people have enormous potential power. The 2011 pension strikes showed a glimpse of this. Health workers took action alongside other public sector workers with over two million taking part on 30 November.

That magnificent strike now needs to be built on. Disgracefully the right-wing leadership of Unison and the GMB, two of the largest unions for health workers, have signed up to an agreement with the government that gains nothing for their members, leaving them with the prospect of working longer, paying more for their pensions and getting less.

Trade union members in health must not accept this. They should demand that they stay in the fight - for their pensions - but also to send a clear message that health workers will not be trampled underfoot as the Con-Dems attempt to pass the NHS over to their big business friends.

Alongside this campaign is the urgent need for a mass workers' party whose representatives would stand to defend the NHS and oppose all privatisation. The Trade Unionist and Socialist Coalition is an important step towards this and should be supported by all who wish to save our NHS.