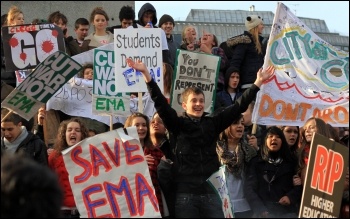 In late 2010, as thousands of college students took to the streets against the vicious scrapping of weekly EMA payments for 16-19 year old students, the government insultingly labelled the grant as 'frivolous'.

On hearing these crass attacks young people may well have felt a rather strong sense of irony. For college students £30 a week is an unaffordable luxury; for greedy bankers, who've presided over financial meltdown, millions in bonuses and inflated salaries are 'just business'.

Of course, no one who received EMA will need convincing that this grant was not a luxury but a necessity. Accusations of the money only being spent on alcohol and cigarettes smack of a government steeped in privilege, utterly removed from the realities of ordinary life.

This week a study by the children's charity Banardos has confirmed conclusively what young people said all along - EMA is essential. The grant enabled thousands of students to continue their studies. Now it has been taken away, many are struggling to continue and are being forced to leave college for financial reasons. Others are skipping meals to pay for their travel to college.

The report pours a bucket of cold water on the government's supposedly 'more targeted' discretionary learners' support fund. Just as Youth Fight for Jobs and Education (YFJE) said at the time, this fund - run on a third of the money spent on EMA - is no replacement for what existed before.

In fact all evidence shows this is far less 'targeted', many of those who need the money most desperately were found not to be receiving it and faced being forced out of education.

We say bring back EMA, and immediately expand it to be available to all those studying in sixth forms and colleges. YFJE is campaigning in towns and cities across the country for its re-instatement.

We demand that local councils continue to fund the grant (as they have done in Southwark and Tower Hamlets in London) and campaign for the government to fund it nationally. Join YFJE and help us build the fightback today!