'We shouldn't pay for the banksters' bailouts' 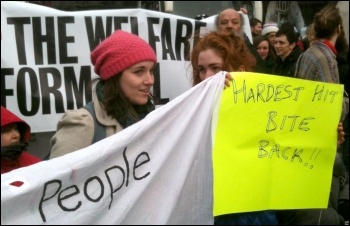 Like many disabled people, I have followed the course of the Con-Dems' Welfare Reform Bill (WRB) with dread. As well as capping benefits to £500 a week which, it has been predicted, will make 800,000 children homeless, the bill would replace Disability Living Allowance (DLA) with Personal Independence Payments (PIP).

DLA supports working disabled people, and has been a great help to me as I work part time on very low wages.

I was granted DLA after being told that I may not see ever again following a traumatic loss of sight in 2004. PIP will be harder to claim with stricter tests.

For example, under PIP wheelchair users will be treated as having no trouble getting around at all, as if everywhere has good wheelchair access.

DLA also provides supervision, for example, for people who may have fits and put themselves and others in danger. The draft PIP criteria does not mention such supervision!

From April 2013 all DLA claimants aged between 18 and 65 will be reassessed for PIP. No doubt profiteers such as Atos will be carrying out the tests.

Atos is already being paid £100 million a year to question 11,000 Employment and Support Allowance (a benefit for people unable to work) claimants each week, with the aim of 'reducing the benefits bill'. Hundreds of thousands of people have appealed against their benefits being stopped. Two-fifths have been successful.

I know of many cases of people who have already been through such tough screening and have lost out. They have missed out on benefits that help them live independently, while still not being able to find work. I fear for myself and others whose benefits could be slashed.

Disabled activists may have been heartened by the house of lords' amendments to the WRB, but they only opposed part of the bill.

All seven amendments were overturned by the house of commons, as the bill was effectively voted into law.

Socialists oppose the whole bill as it is a vicious attack on working class and disabled people. All three main capitalist parties, Tories, Lib Dems and Labour, agree with the principle of the bill - that benefits should be slashed to pay for the bankers' bailouts.

It is time disabled people, along with others in society, say enough is enough and stop attempts to divide us. The disabled, workers, the unemployed, students and young people must unite to fight all cuts.

Disabled abused due to Con-Dem lies

Attacks on disabled people have increased as a result of the Con-Dems' attacks on benefit claimants, according to six charities, with more people being taunted on the street and accused of 'faking' their disability.

While the mass media are also guilty of misleading and inflammatory coverage, the charities say that the government is the main criminal with ministers constantly talking about a massive 'abuse' of disability benefits.

However, the government's own figures say DLA fraud is just 0.4%.

One charity, Scope, found that two-thirds of disabled people questioned in September had suffered abuse - up from 41% in 2010.