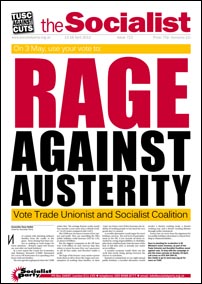 Next threat to under-25s: Housing Benefit

East London and the Olympics

Kill the act before it kills the NHS

When bosses say "we don't need you today"

After a hectic week preparing the ground for the upcoming mayoral and council elections, the Trade Unionist and Socialist Coalition (TUSC) in Liverpool entered the campaign with a bang.

Over 120 union activists, socialists and community campaigners packed into the Liverpool Pub in the city centre on Wednesday 4 April for the campaign launch.

A message of support was given from film director Ken Loach, and then Daren Ireland, TUSC candidate for Central ward and a RMT executive council member, kicked off with a scathing attack on the cuts policies of New Labour.

He also slammed as "disgraceful" the decision of Liverpool Labour to award former Tory minister Michael Heseltine, Thatcher's henchman in the 1980s, 'freedom of the city'.

"With a start of this size hopefully we can set a light under New Labour as they did in Bradford West".

Socialist Party member John Cosgrove highlighted the issues affecting young people, including the desperation of the one million unemployed youth and the fact that the college and higher education system is increasingly becoming a privilege for those who can afford to participate in it.

Finally, TUSC mayoral candidate and Socialist Party member Tony Mulhearn was at his best, rousing the crowd with his political conclusions: "Capitalists built the factories, shipyards, printshops and so on, but those days are long gone; they've abandoned every section of manufacturing industry.

Now they can only 'succeed' by driving our living standards back to the 19th century... There are 20,000 people on the housing waiting list in this city; Ten young people chasing every job. We need to re-establish the values of the labour movement".

The contributions from the floor expressed support for Tony and for all TUSC candidates in the May election.

MMP workers in the union Unite and Enterprise workers in the GMB, who are both currently in struggle with their employers, were impressed with Tony's policies and his unashamedly pro-working class programme.

A financial appeal raised over £1,000, which will be spent on the tens of thousands of leaflets needed for the campaign.

TUSC aims to place a marker to rally workers, the young, disaffected, unemployed, and pensioners to the fight back against the politicians of the main parties and the bankers and big business people who are attempting to dismantle all the hard-fought for gains workers have won post world war two. TUSC also argues the need for a socialist society.

The meeting has got the campaign off to a great start; Tony4Mayor and other TUSC campaigns in the city will no doubt have rattled council leader and mayoral candidate Joe Anderson and his New Labour friends.

This version of this article was first posted on the Socialist Party website on 6 April 2012 and may vary slightly from the version subsequently printed in The Socialist.

Vote TUSC in May

Next threat to under-25s: Housing Benefit

East London and the Olympics

Kill the act before it kills the NHS

When bosses say "we don't need you today"