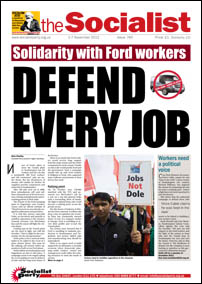 Prepare for a 24-hour general strike

Housing: How the market has failed

Bromley council: Drop your plans or face a strike!

EDL fails in second attempt to rally in Waltham Forest

Rotherham workers and youth unite against the National Front

Student demonstration must be just the beginning 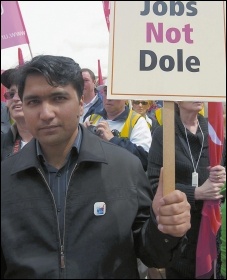 News of Ford's plans to close the Transit plant in Southampton has hit workers and the city like a bombshell. 500 Ford workers' and 450 contractors' jobs are under threat. But the shockwaves of closure will rumble far further. 81 suppliers provide components and materials to Southampton.

After 700 jobs were cut in 2008, these redundancies will suck millions of pounds out of the local economy, leaving unemployment and increasing poverty in their wake.

The closure of the Ford stamping plant in Dagenham, east London, comes with an official estimate of 750 job losses in an area already ravaged by joblessness and privation.

It is vital that unions, especially Unite, act decisively and speedily to mobilise opposition to the closures. General secretary Len McCluskey has said the union will fight the closure plans.

Leading reps in the Transit plant see the need to fight, one told the Socialist: "This is a fight for the community, for the next generation."

Unite policy is for a national strike ballot to be called in the event of a plant closure threat. This must be the rallying call around which opposition is built across Ford plants.

Strike ballots at Southampton and Dagenham are due to take place. A campaign needs to be waged calling for a resounding yes vote in defence of jobs and the long-term future of the factory.

There is no doubt that Ford workers would receive huge support from the trade unions and the wider community for such a stand. A battle on this scale would petrify Ford and the government. Such a campaign should link up with Ford workers in Belgium at Genk, who organised mass walkouts and protests at their factory last week.

On 20 October over 150,000 marched with the TUC and answered Len McCluskey's call for a vote on a one-day general strike with a resounding show of hands. The fight to defend these jobs could become a rallying point across the private sector.

The dire future of industry in Britain has been exposed. It reflects the deep crisis of capitalism the Socialist Party has consistently warned about. In fear of a stagnant market in Europe, Ford is unwilling to invest their profits and re-tool the Transit plant.

The unions must demand that if Ford is unwilling to maintain production in Southampton and Dagenham and protect skilled jobs and manufacturing, they should be nationalised.

There is an urgent need to build support for an alternative, a socialist economy where democratic planning under workers' control and management could utilise the existing resources to meet the needs of society.

With the devastation of industry in Southampton under the Tories and New Labour, the Transit plant is the last major industry in the city paying decent wages.

The Transit is a market leader, a profitable vehicle for Ford. "You could gift wrap a Fiesta, stick it in the back of a Transit, sell the Transit and still make a profit", were the words of a former Southampton Transit manager.

The scandalous truth is Ford wants to shift production from Southampton to Turkey. The company wants to make even bigger profits by exploiting cheaper labour there.

Ford has offered redundancy terms which will seem generous. The sums however do not offer a rosy future. In 2008 around 700 workers were made redundant, in the main the older, 50-plus age group in the factory. The majority left are in their 40s or younger. That means redundancy money might last two or three years.

Where are the other well-paid jobs? The union must explain that the only future is to save the factory and jobs.

Con-Dem Business Secretary, Vince Cable, moans he was "kept in the dark". Labour leader of Southampton city council, Richard Williams, has angered the unions by proposing the site becomes a training park - before a fight has even been launched to save the factory!

This shows that the industrial campaign to defend these jobs needs to be linked to building a new workers' party.

Keith Morrell and Don Thomas, Southampton Labour Councillors Against The Cuts, told the Socialist: "We give our full support to the Ford workers and the fight of the unions to keep jobs and the Transit here in Southampton for now and into the future. Ford has told us that the Transit is 'The Backbone of Britain', but the company is now looking as spineless as this government's industrial strategy."

Keith will be a speaker at Socialism 2012, see www.socialism2012.org.uk