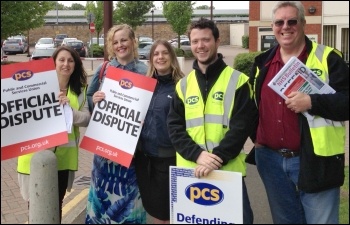 5 June 2013: Maidstone PCS picket (eight on the picket lines) sends fraternal greetings to the NSSN - 'we'll be sending delegates to the conference on June 29th. Solidarity!'   (Click to enlarge)

The National Shop Stewards Network (NSSN) has its seventh annual conference on 29 June. It will bring together trade unionists and anti-cuts campaigners in an important forum to discuss and plan for anti-cuts action over the coming months.

Crucially, activists campaigning against the bedroom tax will be joining fighting trade unionists in the debates and discussions.

Katrine Williams, president of Cardiff Trades Council and Wales chair for the PCS civil service union, and, Tommy Sheridan, Scottish Anti-Bedroom Tax Federation chair, explain why they will be at the NSSN conference. 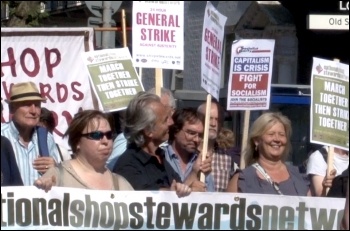 "I have been involved in the NSSN since it was initiated by the RMT transport union seven years ago. It has proved an invaluable network over these years to get union reps together to discuss tactics on how to mobilise to defeat the cuts and attacks on our living standards.

In the PCS we are struggling to make ends meet. It is our seventh year in the Department for Work and Pensions (DWP) without an inflation-proofed pay rise, yet big business thinks it is fine to avoid, evade and not pay £120 billion in tax every year.

But this is provoking mass anger. When a lead is given, workers show they are willing to fight. PCS joint action across DWP and HMRC is getting widespread support with our demand to close the tax gap so that we can fund a fair welfare system to meet the needs of all.

The NSSN is playing a key role in promoting the idea that those unions with strike mandates work together to coordinate our action.

This would be the starting point for coordination - cuts in pay, pensions and jobs, as well as privatisation mean every union has a potential trade dispute.

The NSSN campaigned and lobbied the TUC congress in 2012 to call a 24-hour general strike and the TUC voted overwhelmingly to consider the practicalities of such a strike.

The NSSN conference this year is at a key time when we can discuss how we can build momentum for such action across the whole of the trade union movement in the public and private sectors.

Our members in PCS are keen to campaign and strike with other trade unions to maximise the effectiveness of our action.

The NSSN conference will be a great opportunity for union reps to discuss this and keep the pressure on to ensure that the trade union leadership moves on from just exploring the practicalities of organising a general strike and gets on with naming the day for a 24-hour general strike."

"The anti-bedroom tax campaign in Scotland is based in local communities. We are determined not only to oppose the tax but organise physical resistance to bedroom tax evictions.

Our Scottish Anti-Bedroom Tax Federation seeks to bring all the grassroots campaigns together, organised under one umbrella. It makes grassroots action easier to organise and coordinate.

Just like the NSSN, without local activists, groups and the promotion of grassroots activity we would be ineffective. That's what makes the NSSN so important."

The 7th annual conference of the NSSN will take place on 29 June, 11am - 5pm in the Camden Centre, Judd Street, London WC1H 9JE

The NSSN was initiated by the RMT transport union in 2006. Seven national unions - RMT, PCS, CWU, NUM, POA, NUJ, and BFAWU - are either affiliated to the NSSN or officially support it as well as many union branches, shop stewards' committees and trades councils.

The conference will include main sessions on resisting the cuts but also workshops on defending the NHS, organising in the workplace, housing, organising the unorganised, fighting blacklisting etc. It's open to everyone in the trade unions and community campaigners.