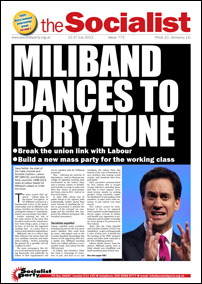 Break the union link with Labour

Build a new mass party for the working class 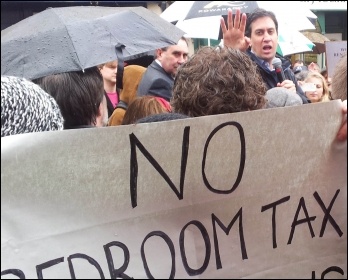 The press roared their approval - "Labour takes on the unions" was typical - as Ed Miliband announced a fundamental review in the party's relationship with its affiliated trade unions. And first out of the box, describing the change as "transformational", was warmonger Tony Blair!

Further reducing the role of the trade unions in the party they founded reinforces the 'transformation' from being a party, at least at its base, of and for, the organised working class - to a party loyal in policies and outlook to big business.

Miliband's aim is to reduce what little influence the unions have left over candidate selection and wider policy-making - further preparing the ground for a possible Lab-Lib coalition in 2015!

The same newspapers that object to elected union leaders speaking financially and politically on behalf of their organisations will not be satisfied with the Miliband proposals.

They - reflecting the interests of big business - want to eliminate any vestige of organised working class involvement in the Labour Party and to portray Labour as divided, and its leader as weak, to make sure their first choice as government, the Tories, wins in 2015. And we've been here before.

In April 1990, Labour was 24 points ahead in the opinion polls (substantially further ahead than now). Instead of attacking the Tories in government it attacked the leaders of the anti-poll tax campaign and the socialists who supported the Militant newspaper (the Socialist's forerunner).

Labour expelled many socialists, including myself, but the Tory press wasn't satisfied. They came back for more, with papers such as the Evening Standard demanding that dozens of left supporting MPs face a similar end. Miliband attacking Unite over Falkirk will have a comparable result. And Labour lost the 1992 election!

In Falkirk, and elsewhere, Unite has tried to encourage its members to join, and then to try and transform, the Labour Party. But instead of the tens of thousands of new members that strategy would require, only hundreds have been persuaded.

Each successive announcement by New Labour that it accepts George Osborne's spending plans, and that it won't oppose, never mind reverse, attacks on working people's living standards, makes the likelihood of persuading Unite members, or other active trade unionists, to join Labour ever more remote.

New Labour cannot be transformed, it has to be opposed. Unite's policies on full employment, decent wages, reversal of welfare and benefit cuts, opposition to privatisation and for public ownership are never going to be promoted by New Labour.

That's why the Trade Unionist and Socialist Coalition (TUSC) was established - to give working people a voice of their own. It already has the backing of the RMT transport union and other trade unionists at the fore of fighting austerity.

Labour clearly doesn't want the unions. Affiliated unions such as Unite should now disaffiliate and build a political party of their own.