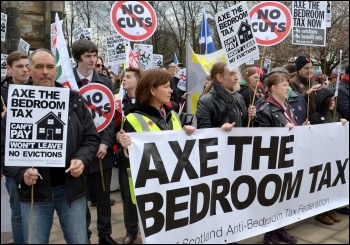 North Lanarkshire, a Labour run council, that sent out letters threatening to begin eviction proceedings, any time after 2nd September, has been forced into a big retreat as a result of the mass pressure from the anti-bedroom tax campaign.

Over 100 people came to a packed out meeting in Fallside Community centre to show solidarity with Lorraine Fraser, who has been sent the first eviction notice in Scotland for bedroom tax arrears.

Council leader Jim McCabe announced a concession to the campaign from the top table, hoping to buy himself some breathing space with the announcement of a 'no evictions' policy in North Lanarkshire, until the end of the financial year.

He also urged people to apply for the discretionary housing payments, and newly set aside tenants fund.

SNP MSP Richard Lyle gave a speech about the need for an independent Scotland, and merely repeated his party's pledge to scrap the bedroom tax within one year of being elected after a Yes to independence vote.

Tommy Sheridan spoke about the need to fight the bedroom tax, and of the human cost to people like Lorraine Frazer.

He highlighted the measures that could be taken at each level of government. He said: "This just shows what a strong local campaign can achieve. This council has bent under the pressure brought to bear from this local campaign".

The floor was opened up to questions with very angry contributions from people. One said to councillor McCabe: "We will be conducting a campaign of civil disobedience, if you won't join us then you are against us".

I, a Socialist Party activist, made the point that councils up and down the country are bullying tenants into paying, and said: "What do we all know about bullies? Well we know that they are cowards.

"These guys at the top table are too afraid to stand up to the Tories and their cuts, they would much rather bully and harass Lorraine Fraser for £248.

"You take the expenses and the privilege, you have to take the responsibility. The Tories implemented the bedroom tax, with the full confidence that it would be passed on, like every other cut, by Labour councils and the SNP at Holyrood.

"We need these people to follow the example set by the Liverpool council in the 1980s, set budgets based on need rather than cuts".

Meeting organiser John Park said: "The strength of the Scottish Anti Bedroom Tax Federation is growing and the word is spreading throughout the schemes, villages towns and cities".

As Gail Morrow, secretary of the Scottish Federation commented, the campaign winning this concession, even though it is a very weak 'no eviction' policy, shows that local campaigns have the power to really affect change in their area.

"Councillor McCabe was visibly shaken by his experience tonight, so now he has a taste of what it feels like when the threatening letters come through the door, telling you to pay or face eviction".

This version of this article was first posted on the Socialist Party website on 30 August 2013 and may vary slightly from the version subsequently printed in The Socialist.