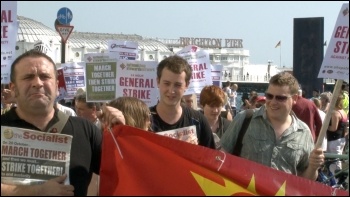 Twelve months ago TUC Congress overwhelmingly passed the prison officers' union POA motion, calling on the TUC to consider "the practicalities of a general strike" to oppose the crushing Con-Dem austerity offensive.

Many will ask how it has been possible for this resolution and the mass coordinated action it called for to still be sitting on the table, particularly when if anything, the brutal cuts are biting deeper than ever.

Over 400,000 public sector workers have been sacked, with as many jobs again threatened and the pay freeze has effectively continued.

We now find out that up to one million workers are on zero-hour contracts, which are used by one in four companies.

Given all this and the bedroom tax and further attacks on welfare, no wonder one million families are using the loan shark pay-day loan companies while 500,000 are forced to use food banks, the modern-day soup kitchens.

On top of this, the NHS is imploding before our eyes as a result of swingeing cuts brought on by the Con-Dems' Health and Social Care Act, plus the scandal of paying the Private Finance Initiative vultures, who have been courted by successive Tory and Labour governments.

But the mass mobilisations against NHS cuts show what can be achieved. Over 25,000 marched in South London in January to defend Lewisham Hospital while up to 50,000 - almost the whole population of Stafford - were on the streets in April to fight to save their hospital!

The Socialist Party supports the TUC demonstration outside the Tory Party conference on 29 September and will help build a mass protest. But on its own, this demo won't be enough to force the government back.

The defeat of Cameron on Syria will give working class people confidence that any so-called invincibility of this government is an illusion.

A mass movement with mass coordinated strike action at its core could defeat them. This is the message that must be delivered to the trade union leaders this week.

Civil service union PCS members have been involved in a campaign of strike action on pay, jobs and pensions which amounts to a five-month long war of attrition.

The NUT and NASUWT teachers' unions are about to re-start their rolling regional strike action that began in the North West at the end of June.

They have stated that it will continue this autumn and culminate in national strike action, the first of which is likely to be at the end of November.

We continue to campaign alongside the National Shop Stewards Network (NSSN) for the TUC and the unions to organise a 24-hour general strike.

But the teaching unions' decision also raises the idea of other unions coordinating any current or potential industrial action with them.

FBU members have voted by 78% to take strike action on pensions and CWU are balloting over Royal Mail privatisation.

We call on TUC delegates to support all those motions and composites that support the type of mass action that is necessary to resist this fat cat government's cuts.

But we also call on the union leaders to get in a room together this week to open their diaries and coordinate strikes this autumn.

Exactly two years ago, they did this and announced the N30 strike which saw two million public sector workers strike together to defend their pensions.

Unfortunately, that dispute was halted because Unison and the GMB caved in with the support of the newly knighted former TUC leader Sir Brendan Barber.

Now they argue that there isn't a mood for a 24-hour general strike - reflecting their own inaction, not the mood of workers.

It's true their delay has allowed the Con-Dems to implement austerity measures and have some success in whipping up divisions among those suffering from the cuts.

But straitened living conditions also mean national action could have an electrifying effect. If the TUC was to set a date for action, all of those unions involved in disputes against different aspects of austerity could coordinate their ballots.

Without doubt other groups of workers - alongside students, pensioners and the unemployed - would then also take the decision to join in the action on the date that had been set.