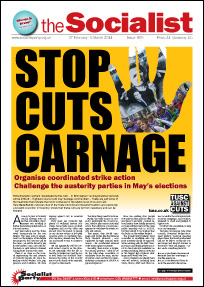 Geoff Jones provides a bite-sized Marxist analysis to answer his question, "Wales: A Land of Whose Fathers? (LWF)" Very little has been written about the Welsh working class, though Wales was the world's first industrialised region and so home to one of the oldest working classes.

During the 1831 Merthyr Uprising, the world's first red flag was flown, a white sheet soaked in a cow's blood! Class struggle is woven into the fabric of Welsh history since the industrial revolution.

This book charts the battles fought by early trade unionists and workers of the valleys who were owned body and soul by ruthless ironmasters.

Their struggle for votes and political representation help the reader interpret Welsh history from the worker's viewpoint during the development of capitalism and Welsh society.

The book analyses events in 20th century Wales, discussing the role Wales played in the Spanish Civil War and chronicling the titanic battles fought by miners throughout the decades.

This culminated in the 'civil war without guns' in 1984/85, between Thatcher and the vanguard of the British working class at the time, the miners.

LWF takes up political and economic aspects of Welsh working class history by examining the Labour Party's creation and growth, its role in the 20th century's major events and its eventual abandonment of class politics.

So now, the Con-Dems in Parliament load bullets in the gun of austerity while the Welsh Labour government and their councils wilfully pull the trigger.

We need to understand Labour now and how it was created as we look to build a new mass workers' party.

LWF demonstrates that Wales is a land built by our working class forebears, a land now facing similar problems to before.

We need to overthrow this rotten capitalist system by realising our full power through struggles to fashion a new, socialist world.

Land of Whose Fathers?