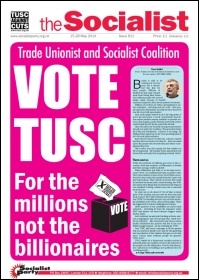 Building Labour: when workers first formed their own party

Throughout the 19th century it was seen as unquestionable that the Liberal Party - an alliance of industrial capitalists and the urban middle classes - should be the party supported by workers, and that this would always be the case. But in a few decades all that changed and the Labour Party was born.

At the end of the 19th century, like today, British capitalism was in crisis. The era of Britain as an unrivalled imperialist, capitalist power, was over. The ruling class faced huge competition from rival capitalist classes and the economy was struck by one depression after another.

Again like today, the bosses and governments tried to force the cost of these crises onto the backs of working class people. Half of wage earners lived in poverty. Between 1889 and 1913 real wages fell by 10%.

This situation was leading to more and more conflict between the bosses and workers. Until this point the main unions were traditional craft unions for skilled workers, which were tied to the Liberal Party and pursued tactics of 'partnership' between workers and employer. But mechanisation and industrialisation had changed the nature of work - there was now the base for mass unionisation of unskilled workers.

In 1886 a group set up by supporters of Karl Marx, the Social Democratic Federation, started organising the unemployed. There were big demonstrations, including of 75,000 in London against the closure of factories in the East End. This developed into a huge movement demanding the eight-hour day - for sharing out work without loss of pay.

The campaign was taken up by wide sections of unskilled workers. For example the Ayrshire miners had traditionally been committed to the Liberal Party and its policies.

But when the mine owners threatened to sack the workforce and replace them with unemployed workers from Glasgow, they were forced to fight. One of these miners was Keir Hardie, a founder of the Labour Party. Similar campaigns were taking place across the country.

This rise of unionisation of unskilled workers also posed the need for a party that really represented their interests. These new unions were in constant conflict with the ruling class and so had to challenge them politically - to challenge their laws, their parties and ultimately their whole system. And the movement for an eight-hour day - which was taking place internationally as well as in Britain - became a key link between industrial and political struggles.

There was debate about what any new party would stand for. Commenting on this, Friedrich Engels, collaborator of Karl Marx, said in the Labour Standard in 1881: "The time is rapidly approaching when the working class of this country will claim...its full share of representation in Parliament. Secondly...the working class will have understood that the struggle for high wages, and short hours, and the whole action of the trades unions as carried on now, is not an end in itself, but a means towards a higher end", the end of exploitation of workers altogether.

Not everyone in the labour movement agreed with the call for a new party. Many leaders of the Trades Union Congress (TUC, formed in 1868) were still tied to the Liberal Party and said that the time wasn't ripe for anything else. But workers were increasingly involved in bitter disputes with both Tory and Liberal bosses.

In this way, the objective need for a new independent party for the working class became clearer on the basis of workers' experience of struggle. Concerns about likely results and immediate success could not hold back what had become necessary - a decisive break from the Liberal Party.

In 1892 the Independent Labour Party (ILP) was formed. It gained some trade union backing and support from Keir Hardie and the Scottish Labour Party. But there were seven years, during which the ILP had limited electoral success, before the TUC, under pressure from the ILP and others, finally passed a motion calling for the Labour Representation Committee (LRC) to be formed.

There was no individual membership of the LRC (or of the Labour Party until 1918). At the first meeting of the LRC in 1900 less than half of the TUC unions affiliated. But in many ways there was a 'perfect storm' of conditions which gave impetus to its development.

The bosses were responding to victories won by the early new unions with a huge counter-offensive. They organised into sectional employers' federations, locked workers out and employed scab labour.

On top of this the full force of the state was used to attack organised workers. Following a court decision to allow the Taff Vale Rail Company to sue the railway workers' union for damages through strike action, affiliated trade unionist membership of the LRC increased by hundreds of thousands.

In the 1906 general election, the LRC won 29 seats. At their first meeting after being elected, these MPs decided to adopt the name 'the Labour Party'.

While it had 'liberal', pro-capitalist leaders from the outset, the Labour Party was based on workers' organisations. There was a sense that it belonged to workers and that it was a mechanism through which they could organise, both politically and industrially.

This is no longer the case. But for socialists and trade unionists today, the formation of the Labour Party offers lots of important lessons about the approach we should take as we again fight for independent political representation for working class people.

For a longer article on the formation of the Labour Party see www.socialismtoday.org/45/labour