No More Carnage in Gaza 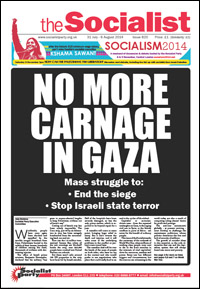 In the latest government u-turn, Vince Cable, Lib-Dem Business Secretary, announced that the student loan sell-off is to be scrapped. Cable told a conference of Lib Dems that the plans don't make financial sense - selling the loan book to private companies would result in the government getting a lump sum payment, rather than its steady trickle of income under the current system.

This shows the ideological nature of the sell-off - Osborne and the Tories, who strongly advocated a sell-off, have acted purely in the interests of their big business friends. By raising interest rates and lowering the minimum earnings threshold for repayment, the private buyers would be set to make huge profits - by exploiting students.

From the moment these plans were leaked in June 2013 it's been obvious they make no financial sense - why are Cable and the Lib Dems only now opposing the privatisation? What student protests there have been against the sell-off have no doubt played some role, but the movement has been relatively small compared to what it could have been if the National Union of Students (NUS) had taken a clear lead.

But the general election is only ten months away. The Lib Dems want to look like the party that stands up for education. Their track record would suggest otherwise, though. In 2010, their MPs were elected after opposing the tripling of tuition fees. Then as soon as they were safely in government, they turned their back on those promises.

As for Labour - they are the party that introduced tuition fees in the first place, at £1,000 a year, and then tripled them to £3,000. None of the three main parties will stand up for education, or for students.

But these three parties are weak. The government has demonstrated its instability time and time again, repeatedly making plans and having to turn back on them. There are rifts in the coalition, and within the individual parties themselves.

If we were to have a mass movement of students, opposing not only the student loan sell-off but all the other attacks on education too, it could demand and achieve significant, concrete gains.

What's been preventing this kind of mass mobilisation is the lack of action from the NUS. When they called national demonstrations in 2010 against the tripling of tuition fees, 50,000 students marched on parliament. The role they could potentially play as organisers and leaders of a student movement is clear - but the NUS' right-wing Labour leadership refuse to fulfil this role.

They're afraid of the direction such a movement could take. After witnessing the militancy and anger of the 2010 demonstrations, they condemned them, and called no further action. They're afraid they will lose control; and that students will call the Labour leadership of NUS, along with all the other establishment parties, to account.

As socialists, we must fight to reclaim our student union. The election of Socialist Students member Edmund Schluessel to the NUS NEC (National Executive Council) both last year and this year has given a national platform for socialist ideas. If the NUS took leadership of the student struggle, we could make immediate, concrete gains in the fight to defend and improve education.

The three main parties have no interest in fighting for ordinary students and will do everything in their power to make sure that gains made aren't permanent. We need a party that will stand up for us!

But students can't do it alone - the power to change society lies, ultimately, in the hands of the working class. The NUS needs to link up with the trade unions, to unite the struggles of students and workers, and fight for the creation of a new mass workers' party that acts in the interests of the masses, not the bosses.

This version of this article was first posted on the Socialist Party website on 24 July 2014 and may vary slightly from the version subsequently printed in The Socialist.