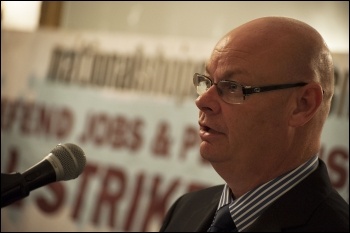 Members of the POA prison officer's union who work in secure hospitals are due to strike over pay on 24 October from 7am to 11am. POA general secretary Steve Gillian spoke to the Socialist about the action.

"The POA has taken the decision to strike on 24 October after balloting our members at Ashworth, Rampton and Broadmoor as a result of the coalition government failing to fulfil the NHS pay review body recommendations.

Our members do an extremely important job in protecting the public and we deserve to be treated fairly. I think it's ironic that at a time when members of parliament latch on to the idea that, because an independent pay review body says they should get a 10% pay rise, that's acceptable. And at the same time they're saying to NHS workers that unless you are at the top of your scale, you're not getting the 1% consolidated pay rise as recommended by the pay review body.

Some of the people that have been affected by this are very low paid workers. We feel it's completely unfair. This is on the back of pay freezes. Striking is the only way that our members can get that message across.

We recognise that some of the most damaged people in society are being looked after by our very professional members in the secure hospitals - Ashworth, Broadmoor and Rampton. We take our responsibility very seriously. We will make sure that there are adequate minimum cover arrangements in place to protect not just the public, but the interests of the patients as well.

We will be a responsible trade union, but we see no alternative but to take the action and make our voices heard loud and clear."

This version of this article was first posted on the Socialist Party website on 16 October 2014 and may vary slightly from the version subsequently printed in The Socialist.