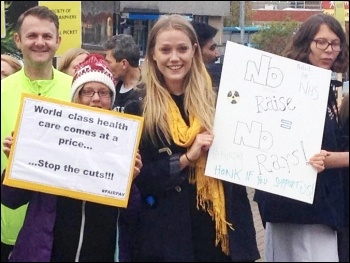 For the second Monday in two weeks, striking healthworkers received huge public support for their pickets outside the Southampton General Hospital. From radiographers to midwives, porters to nurses, the message is unanimous, "enough is enough!"

With no pay raise for four years, Society of Radiographers pickets explained why they were on strike: "There is a huge retention and recruitment crisis in this service. Those of us left are facing growing demands. 90% of people coming into a hospital will come through our service. Many are retiring and there is not enough recruitment". Others put it more bluntly: "I've done 75 hours a week for the last two weeks!"

So low paid, many healthworkers are taking extra hours as agency staff in an understaffed NHS, at massive cost to the NHS, but significant profit to the agencies. As they say, 'follow the money' if you want to know what's going on.

When asked what the solution was, the immediate response was: "Stop privatisation. The sister service in Southampton at the Royal South Hants has been handed to Care UK. This means chaos, as x-rays are coded differently, go missing and patients arriving for treatment at the SGH have to re-x-rayed, which is in breach of legal requirements that insist patients receive the minimum radiation.

Many pickets were young and angry: "Three years training and massive student debts, we are starting on £21,000, can't afford a home and do a job that if we get it wrong could kill someone! We are not paid enough!"

This was a familiar tale from many healthworkers, paid less and expected to do more. "Nurses are doing 12-hour shifts, two in a ward of 30 patients. If staff on the next shift are sick, it can take hours for cover to come in". Midwives explained how the job has changed: "I'm close to retiring, when I started we did home visits and allocated an hour and a half to meet the mums and get to know the family and their needs. Now local maternity units have gone, forcing mums to travel to centralised clinics where they get a 15 minute appointment".

There was no end to the car horns and ambulance solidarity sirens giving their support today. All the Westminster politicians say they back the NHS but when it comes to it the NHS is those that are out on strike today and those parliamentary politicians are nowhere to be seen. Significantly, local rebel councillors from the area, Keith Morrell and Don Thomas, came to give their solidarity!

In Southampton it is clear that healthworkers have had enough and know a fight is on to save the NHS!

Around 30 striking radiographers gathered at the main entrance of Morriston hospital in Swansea. The pickets were young, lively and predominantly female health workers who were determined not to go another year without a pay increase. "It's ok for the MPs and their 10% pay rise but what about us?", they complained.

With another ballot of other health workers in Wales closing today there was unanimous agreement that "we should all be out together!"

It's not only pay that concerns these radiographers. They have seen colleagues leave the profession because of increasing attacks on their conditions as well. If there is no improvement, then others will undoubtedly leave, resulting in longer waiting lists for diagnostic examinations and treatment for cancer.

The anger and willingness to fight for decent pay and conditions is there in bucketfuls, it's high time the trade union leaders pulled them all together! 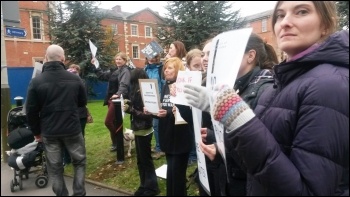 Today radiographers from Leicester hospitals came together for a 30 strong picket outside Leicester Royal Infirmary, taking industrial action this month for the first time in over 30 years.

Following a ballot in which 53.7% of members voted for strike action, work was stopped between 9am and 1pm. In addition to this the Society of Radiography members will work to rule for the remainder of the week.

The picketers were overwhelmed with support from passers by, with cars beeping their horns in solidarity.

Workers were surprised however that the action had not been coordinated with other workers, as they felt there would have been more impact if all workers had been out on the same day.

As a way of continuing the discussion about ending low pay in Britain, Leicester Socialist Party is organising a public meeting on Wednesday 22nd October at 7pm titled "A strategy to defeat the cuts - one day general strike". This event will be held at the King Richard III pub on Highcross Street in Leicester. 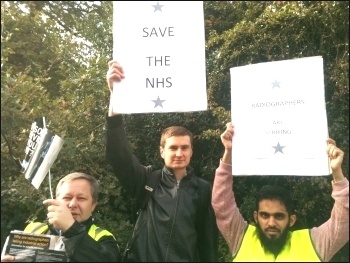 "We're striking to stop the five-year pay freeze, and to have a pay increase comparable to the MPs' 11%".

"The radiographers are striking today to show the government that we won't accept pay cuts, and that we won't let them destroy the NHS. The public has seen that a pay freeze means stagnated wages, but in fact they are actually year on year cuts. Austerity is making Britain poorer; fight back against Conservatives!" 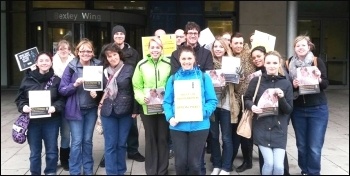 Hot on the heels of last Monday's strike over the pay freeze in the NHS by a number of unions, was a further four-hour strike by members of the Society of Radiographers (SoR).

The picket lines at St James' hospital in Leeds were impressive with around 40 pickets covering both the main entrance and the entrance to the Bexley wing. They were joined by some reps from the Unite and Unison branches at the hospital, who are due to take further action as part of the dispute over pay.

One SoR industrial rep explained to me how radiographers have suffered a 15% pay drop in real terms over the last five years.

Another picket commented how she feared for the NHS as a whole as a result of the ongoing cutbacks - although she was nearing retirement, she worried about the quality of service that could be provided on an ever shrinking budget.

As she put it: "I may retire soon, but just like everyone else, I may need them to look after me in the future".