Anger on the march against low pay 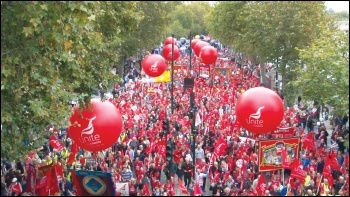 The overwhelming mood on Saturday's demonstration was one of hot anger.

First and foremost, it was anger at the brutal Con-Dems. Years of austerity have left workers reeling. In particular, the government's 1% public sector pay cap is worse than insulting. There's no such belt tightening for the 'haves'. Britain's 104 billionaires saw their wealth rise 20% last year.

For young workers, the low-pay crisis is particularly acute. As Milburn's report highlighted, under 30s face being 'priced out of the UK' with youth wages currently no higher than they were 16 years ago.

House prices have risen 400% in 20 years. For this generation, insecurity is the name of the game. Zero-hours employment, precarious housing and poverty wages are the stuff of life.

Demonstrators had reserved plenty of anger for Labour too. During the strike action by health workers and civil servants, the sound of Miliband's silence was deafening.

It is a measure of Labour's utter cowardice - not to mention that of some right-wing trade union leaders - that one of the harshest attacks their party received came from one of their own.

Milburn is a former cabinet minister and arch-Blairite. Yet even he can see that an £8 an hour minimum wage by 2020 is "nowhere near good enough".

This is contrasted to the huge enthusiasm for £10 an hour now, as called for by the Socialist Party on the TUC march. As one worker said when signing a petition: "£10? Now that's more like it".

Determination to fight is clearly in no shortage among the hundreds of thousands who have been on strike and marched in October. But this determination has not always been matched by the leadership of the trade unions.

There was fury among many local government workers that they had been denied their chance to strike. Teachers and other groups were angry that their unions were also not part of this month's action.

Now the urgent task is to rebuild coordinated strike action as a step towards a 24-hour general strike. This could draw in unorganised layers and help bring the colossal weight of the working class to bear on an out-of-touch political elite and their crisis ridden system.

Many people enjoyed their first major trade union protest on the 18 October. It once again demonstrated the huge potential power of workers.

Now we need to get organised to make sure that strength is put to use. This is why the Socialist Party supports the National Shop Stewards Network (see www.shopstewards.net).

We need to keep up the pressure on the trade union leaders. Crucial to this is building democratic fighting left organisations in the unions and involving activists in the structures of the union. This task has never been more urgent. At stake, is the future of the 99%.