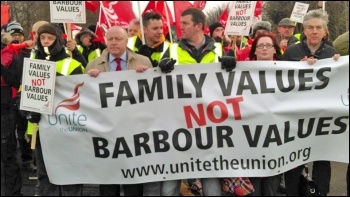 Workers from Barbour's Gateshead warehouse are on four weeks of strike action against the imposition of changes to their terms and conditions.

On Friday 9 January around 100 strikers and supporters from the FBU, Unison, BFAWU bakers union and others participated in a march to Barbour's South Tyneside HQ.

One of the strikers commented that support for the strike was outstanding. He went on to say that Barbour management keep saying that the workers have been dragged into this action by Unite the union. Today's demo clearly shows this is not the case.

On the march the union's banner stated: "Family values not Barbour's values". This is in response to the company's website where they boast of being a business that honours "our Barbour family values".

Strikers at the warehouse said: "We've had these values preached to us over the years." 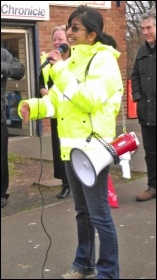 One of the Barbour marchers speaking to fellow strikers outside the company's HQ, photo by Elaine Brunskill   (Click to enlarge)

Many of the strikers have worked for the company for years, and feel shocked at the changed attitude of this "family orientated" company.

Gary Heaney, Unite shop steward, made the point that until recently Barbour's was regarded as a decent company to work for. However, he went on to say: "Now it feels all of a sudden it's about profit before people."

Strikers also commented that Barbour's advertising often showed families, albeit rich families, wearing their jackets. But if the changes go ahead it would have a detrimental effect on the workers' family life. Gary commented: "We would go from working to live, to living to work."

The main issue for the strikers is that Barbour is wanting to change shift patterns. Currently shifts run from 7.30am (or 8.30am) until 3.30pm (or 4.30pm). But Barbour wants workers to have a two-shift system. A dayshift between 6.30am and 3pm, and a backshift between 2.30pm and 11pm.

This has stunned the workforce, particularly because the industrial estate is in a really isolated location, with extremely poor public transport links. Workers who have raised issues around the safety of staff having a 15 minute walk along a desolate road in the dark were told by one of the company's directors: "At the end of the day that's not our problem."

Barbour is also attempting to impose a system whereby workers would be paid for 39 hours per week, but only work 37.5 hours. The excess hours would be banked, then at Barbour's discretion workers would be pulled into work when needed. This would mean the workforce being compelled to work weekends without any additional overtime pay.

In taking four weeks of industrial action Barbour strikers are showing they are serious about fighting these proposed changes.

A picket at the start of their four week strike, photo Elaine Brunskill   (Click to enlarge)

Update - 14.01.15: Barbour workers have won a victory and ended the strike following a new offer from management over shift patterns and pay. The strikers have returned to work today after voting to accept the deal.

This version of this article was first posted on the Socialist Party website on 9 January 2015 and may vary slightly from the version subsequently printed in The Socialist.