This emergency is no accident! 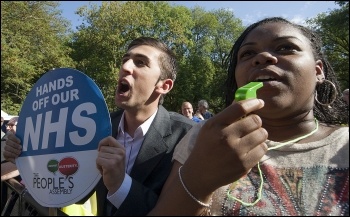 Hands off our NHS! photo Paul Mattsson   (Click to enlarge)

The NHS is under increasing strain as the crisis in hospitals' Accident and Emergency (A&E) departments deepens.

Over that period the number of trolley waits (patients waiting over four hours for a bed after being admitted from A&E) more than trebled when compared to the same time last year.

Sixteen hospitals were forced to declare a "major incident", where a hospital admits to being unable to cope with the workload it faces and needs extra staff. The number of hospitals where overworked, underpaid workers are already at breaking point is much higher than that.

An overstretched A&E department also means other services, such as routine operations, being cancelled at short notice.

How has this A&E crisis developed? Years of cuts to local government services, by councils led by all three major political parties, has resulted in a shortage of social care provisions for elderly and disabled people.

There have also been staffing cuts, putting huge pressure on those who remain and are expected to deal with an increased workload with fewer resources.

The NHS will be a major battleground for the mainstream political parties in the build up to May's general election. But their unanimous support for private interference in public health and the piecemeal cutting of services, show that not one of them can be trusted with the future of our NHS.

A&E is one of the most unrelentingly stressful parts of the NHS to work in, and many staff face exhaustion. The last thing anyone should want is for these workers to feel demotivated. But that is exactly what the government is risking by refusing to give NHS workers even the paltry 1% pay rise recommended by the NHS pay review body.

In response the health unions will be taking a further two days' strike action; for 12 hours on 29 January, followed by 24 hours on 25 February, to fight for our overstretched NHS to be staffed by motivated and decently paid workers.