The Socialist Party is appealing for £50,000 to help fund our candidates for the 2015 elections, as part of TUSC. Below members explain why they are donating. 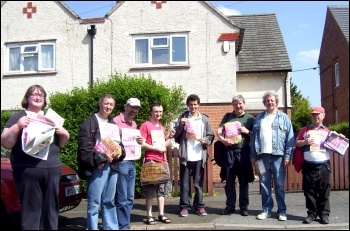 "Derby Socialist Party had two of four candidates in last May's TUSC election campaign. We made history being part of the biggest left challenge to Labour in 60 years. This year TUSC is looking to make an even bigger stand with 100 parliamentary and 1,000 council candidates. To ensure we take full advantage of this opportunity finance is of utmost importance.

I pledge £300 towards the Socialist Party's appeal of which the first £100 has been paid.

In Derby, TUSC has organised a public meeting against the closure of a local pool and leisure centre. The day after the council announced the closure, TUSC supporters held a stall opposing the closure and received an excellent response to our petition. An online petition has been signed by over 6,000 people in a short period of time showing the anger against the proposed closure.

At our meeting we will aim to encourage people opposed to the closure to stand in the election. This will give the campaign a big platform that will add to the pressure the council is already facing on this issue."

"Although it always feels like 'there's too much month at the end of the money,' I'm proud to contribute £100 to the Socialist Party's election appeal.

Times are tough when you have children, work in the public-sector and had years of real-terms pay cuts under New Labour and the Tories.

Many public servants face job cuts, a threat that exists for firefighters in Lincolnshire among many others.

TUSC supporters in Lincoln and District TUC have played a part in launching a new 'Defend Our Fire Services' campaign in conjunction with the Lincolnshire FBU to stop the cuts, with prospective Lincoln TUSC candidate Elaine Smith elected as spokesperson."