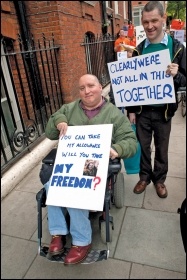 Millions in the UK are suffering the effects of unemployment. For many it's a daily struggle with a complicated bureaucracy, the effects of poverty and the countless rejections from job applications.

It is estimated that over one million sanctions were given out to those claiming Jobseeker's Allowance, and Employment and Support Allowance (ESA) during 2013-14. Under government pressure those numbers are only going up. Hundreds of thousands of sanctioned claimants have been forced to turn to charitable foodbanks in order to survive.

The way sanctions are used is coming under widespread criticism. Unite Community trade union has offered a lead in opposing sanctions, calling for a national day of action on 19 March, around the slogan "No Targets for Staff - No Sanctions for Claimants". Socialists will be supporting actions up and down the country.

The failure of benefit sanctions can even be seen by the companies brought in by the government to administer the system. The Employment Related Services Association, which represents private profiteers like G4S, A4E and Serco, has recently said: "For the vast majority of jobseekers, sanctions are more likely to hinder their journey into employment."

When criticism is even coming from scandal-ridden businesses that make millions out of public services, you'd think that the main parties would take notice. However, hated Department for Work and Pensions secretary Iain Duncan Smith has continually defended his massive increase in targets for sanctions.

That doesn't mean the supposed opposition has been any better. After the court of appeal ruled in February 2013 that it was unlawful to sanction those who refused to work for free in workfare schemes, the government had to put in a bill to avoid paying compensation to claimants unfairly sanctioned.

It was Ed Miliband who ordered Labour MPs not to vote against. A disgusting and hypocritical move from a party that is meant to be tackling the "cost of living crisis".

But it's not just spitefulness from the Tories that has led them down the road of harsh sanctions.

They have encouraged a cynical view of benefit claimants as 'scroungers', rather than victims of capitalism, to justify cuts in government welfare spending and to try and divide the working class.

In a letter to MPs, church leaders point out that the removal of living expenses through sanctions, excluding housing benefit, for three years equates to a £11,000 loss, while the largest fine for a criminal offence which can be imposed in a magistrate's court is £5,000

There are many shocking stories about the effects of sanctions and the almost arbitrary way in which they are imposed by targets from central government. One example is a dyslexic jobseeker interviewed on BBC Radio 4. She had struggled to deal with lengthy and complicated forms and received little practical support. She was sanctioned after failing to meet her target of 48 "job seeking steps" by only completing 47 job applications.

A key element of the Tories' general election programme is the immediate introduction of a further cap on welfare payments to jobless households and the ending of housing benefit for 18-21 year olds. This is despite the poorest 10% of households suffering an average 4% fall in income since the coalition came to power in 2010.

In contrast, Britain's richest 100 people have seen their collective wealth rise by £15 billion since 2008 and now have the same wealth as 30% of UK households (18 million people). The UK is the only G7 country to record rising wealth inequality in 2000-14.