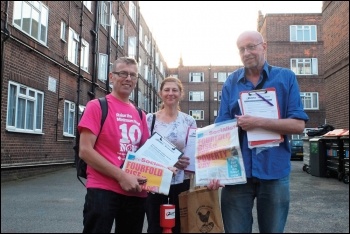 No one can beat the Socialist on analysis and ideas. No one can even come close to the clarity and audacity of the programme we propose. All we need to do is get it out there. We need to sell it.

Who else has been working without rest for an electoral and industrial fight with the cuts-crazed bosses? And who explained it won't be Labour who does it? It will be the real working-class prizefighters we've been backing: unions like the RMT and PCS, and grassroots anti-cuts campaigners.

What other paper is seen on countless strikers' picket lines, students' occupations and renters' marches to save their homes? Not just reporting, but offering practical assistance when asked?

Where else can you sit in with the political white-water rides in Greece, Spain and the United States? And what other paper has sister parties right in there, mapping out where the river will fork?

Only the Socialist. And that's why anyone serious about landing a hit on the greasy snouts of the super-rich needs it.

We print stories by the real experts - ordinary members and workers directly involved in these battles.

But we can only reach as far as the Socialist Party's members will take us. Weekly sales in town centres are central to most branches' activity. But we want to reach the hands of all the angry, exploited and dispossessed.

And we can only keep on being the best if we have money. We're not a 'freesheet', paid for by capitalist advertisers. We depend on ordinary people buying our paper to keep it up.

All of this - input, influence and finance - is where you come in.

Carrying the paper with you everywhere you go is the first habit to get. We all end up in political conversations at work. The same in union branches, tenants' association meetings, and chance gatherings at school or university. When workers are angry, and are looking for answers - we need our paper to hand to sell.

You could also run weekly morning sales outside a major workplace in your area. What better way to make links with fighters and organisers in hospitals and job centres - or browbeaten retail workers?

Some have started to look for new times or locations for their campaign stalls. Your next political live wire could first find our ideas outside the station, storming home from work one weekday night.

And if you have potential regular buyers, have them subscribe!

The only way to achieve any of this is organising. How can you plan to do one extra thing to push the paper further? And how can your branch or region? Could you be their next paper organiser?

No one can beat the Socialist on what we have to say. So let's make sure no one can ignore it either.