As we go to press, the NHS strike due to take place on 29 February over pay has been suspended following an offer from the employer. Members in the different health unions will now be consulted on the offer.

The dispute was triggered when the government refused to implement the Pay Review Body (PRB) recommendation of a consolidated 1% pay rise across the board.

Now more staff will get the 1% pay rise, with an extra one off £200 payment for lower paid workers.

But more could be won. Socialist Party members on the Unison health service group executive opposed the strike suspension.

Look out for more on the dispute in future issues of the Socialist and at www.socialistparty.org.uk 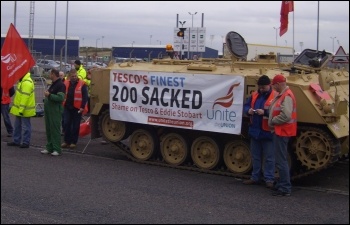 Striking Tesco drivers bring a tank to the picket line with a Unite banner attached , photo A Tice   (Click to enlarge)

The former Doncaster Tesco drivers are on the verge of an historic victory over their unfair dismissal by Eddie Stobart Ltd two years ago.

The dispute started in August 2012 when the workers were transferred from Tesco to Stobart's which then, in September, issued notices of termination of employment. Strikes then took place over four months, including indefinite action in December 2012, before the drivers were dismissed in January 2013.

In an employment tribunal, the drivers argued that Stobart's and Tesco agreed to make them redundant long before the workers were consulted.

An offer. recommended by the union. has been accepted by an overwhelming majority at a meeting of the drivers.

Search 'Doncaster Tesco Drivers' at www.socialistparty.org.uk to read more about the history of this dispute.

Police support strike action, due to take place on 23 January, was called off following an offer from employers of a 2.2% pay rise over two years.

Yet this seems to be little improvement on the original below-inflation offer of 1% a year.

One Unison rep told the Socialist: "Many colleagues are demanding information on why the union is not rejecting this so called 'offer' out of hand. It ties us in to more below inflation rises that workers have already rejected.

"I now face a very disillusioned and angry workforce who are confused and feel left in the dark."

Sheffield Just Eat strikers step up action and hold mass rally: Over 100 trade unionists and students in Sheffield rallied in support of the Just Eat delivery drivers on their 31st day of targeted strike action against company pay cuts. Photo by Alistair Tice