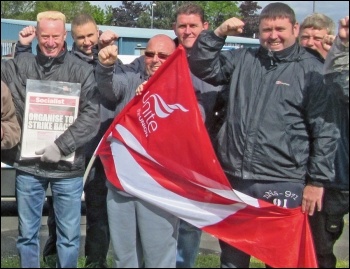 Strike action gets results - no wonder the Tories want to virtually ban it!

Teachers, parents and school students in Lewisham, south London, are celebrating a tremendous victory as plans to make three schools into academies have been sidelined. This follows a hard-fought campaign including demonstrations and strikes by both teachers and pupils, and a legal challenge.

Meanwhile, after escalating strike action, Kone engineers have won a victory over the use of 'spy in the cab' technology to discipline workers.

An all-out strike by Glasgow homelessness caseworkers has made the city's Labour council recognise that those workers should be on a higher pay grade.

And Network Rail workers have been given a much improved pay offer due to the threat of action by the RMT union. Striking works - and big business bosses can't stand it.

Living standards, public services and conditions at work have taken a hammering. That's why a fightback is needed.

Despite their increasing fortunes - Britain's five wealthiest families now own more than the poorest fifth of the population - the rich still want to get richer as the rest of us face austerity.

That's why they are getting their Tory government to make further attacks on the right to strike in a country that has already has some of the most draconian anti-union laws.

The Queen's Speech included a bill that would make striking illegal unless a strike ballot had a 50% turnout. Yet only 24% of the electorate voted for the Tories!

Trade union leaders - through the Trades Union Congress - should now be planning coordinated trade union action against further austerity and attacks on workers' rights. This should start with a workers' demonstration on the day the anti-union bill gets its first reading in parliament.

The National Shop Stewards Network conference will bring together workers on the frontline of the fight against the Tories' austerity onslaught.