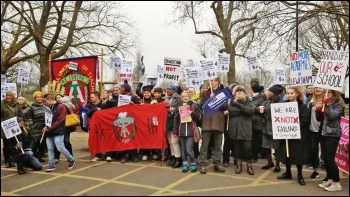 Teachers, school students and parents in Lewisham, south London, have won a great victory! They beat off plans to turn three schools into 'academies' which would have been a step towards privatisation. Martin Powell-Davies, Lewisham NUT union secretary and Stop Academies in Lewisham activists, explains.

For several months members of NUT and other trade unions at the Prendergast Federation of schools, alongside students and parents, have mounted a tremendous campaign to oppose these damaging academy conversion proposals.

Sizeable demonstrations, strikes and meetings - and now legal challenges over government regulations - all helped to keep pressure on governors to think again. Now they have agreed to rescind the academy orders for all three schools in the Prendergast Federation.

This major breakthrough for the campaign reflects the pressure that months of our determined opposition built up. The legal challenges then left governors with little option but to pull back from their plans.

Every campaigner should be proud of standing firm and refusing to accept that the academy steamroller was unstoppable. The campaign shows how little public support there is for academies and the total lack of any evidence that academies help education.

This is not yet a final victory. The Department for Education (DfE) will want to rewrite their regulations so the Prendergast Federation can start over with their plans. However, we will keep up the pressure on Prendergast's governors to resist DfE attempts.

As parent Ned Boulting told the Guardian: "governors have created a rift [that] will raise questions with teachers as to whether they want to stay on at the school". Regrettably, he understood the dangers better than the governors.

Unless or until the governors withdraw their academy plans altogether, then the dispute still continues. For now, the proposed strike action on 3-4 June has been withdrawn. We are confident that, boosted by the latest news, staff, students and parents will be ready to continue their campaign if necessary.