All four unions are saying enough is enough, as staff already working intensive shift patterns are being told they will have to work all night and work more weekends. And the reward? A real term pay cut over two years. Our reasonable demands are a decent pay offer, a shorter working week and no job cuts.

We are fighting not only for our members but for the public as well. We want a fully staffed tube, otherwise it will be unsafe to use. Assaults on staff are already up 44% since the beginning of the cuts.

We make no apologies for wanting to defend our members' pay. All workers in London should be on our scale of pay as a minimum. If they get away with cutting the pay of the best organised workers, they will come gunning for other workers. 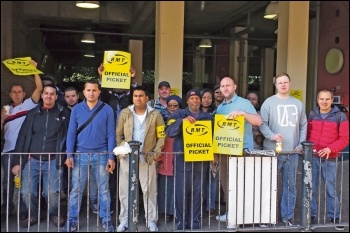 Interserve employees working on the DLR striking on 27 May 2015, photo by Rob Williams   (Click to enlarge)

Up to 30 RMT members were on the picket at the Poplar depot of London's Docklands Light Railway (DLR) on 27 May as the union started a 48-hour strike.

The pickets stood either side of the road in a fantastic show of strength by low-paid Interserve cleaners and security staff over pay and working conditions.

One picket told the Socialist: "This strike has been coming for a long time. This work should be all brought back in-house. Companies like Interserve bid too low for the contract and then try and take it out on us. We're not giving in."

Determined DLR strikers to "fight all the way"