Make Budget Day a day of action on 8 July 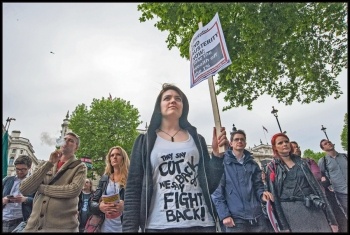 Solidarity, struggle, hope, renewal and determination: None of these words would be readily brought to mind when contemplating our new Tory government's back-to-the-1930's Queen's Speech. But outside the walls of Parliament, on the streets of London, Leeds, Belfast, Cardiff, Southampton and Liverpool, these were the perfect words to describe the protests and demonstrations taking place.

The Tories and big business are celebrating what they see as a new mandate for austerity. With just 24% of the electorate supporting them, the reality is they have nothing of the sort. But working class and young people have our own mandate: a mandate for a fightback.

The Queen's Speech outlined only some of the carnage the Tories have planned. The attempts to curtail our ability to organise - with anti-trade union laws and attacks on democratic rights - show the government's real fear of the organised workers' movement and its huge potential power.

On 8 July, George Osborne will be announcing a budget for the billionaires. Deep cuts - enough to make any normal person shudder - are what are coming. No area will be spared.

But it's clear some groups will be hit particularly hard. Among the most vicious attacks Osborne is likely to announce will be those on welfare. Ian Duncan Smith's £12 billion of 'savings' will hit many of society's most vulnerable people hard.

It's also likely we will hear about a number of cuts which specifically target the young. We have already heard that housing benefit is going to be removed from most under-21s. The Queen's Speech also hinted that plans for a youth allowance, which would see 18-21 year olds forced onto slave-labour schemes after six months of unemployment, would now be implemented.

Young people are being punished for the economic failures of this government, and the capitalist system as a whole. That's why it's essential that on 8 July, as Osborne threatens the livelihoods of millions of working class and young people, we organise to issue a threat of our own.

Youth Fight for Jobs is calling for a huge, national day of action to take place on budget day. This needs to be a day of protest on an even bigger scale than that organised to mark the Queen's Speech, with protests in every town.

As Osborne announces his carnage we need to send a message to the Tories in Westminster - that we are preparing an almighty movement against austerity.