In July Alexis Tsipras, Greek prime minister, agreed the latest 'memorandum' (austerity agreement) with Greece's creditors. On 14 August the Greek Parliament accepted the measures, including oversight by the creditors of every policy decision. Although there was significant opposition. Xekinima (Greek sister organisation of the Socialist Party) described Tsipras, whose Syriza government was elected on an anti-austerity platform, as having "crossed the Rubicon". Xekinima called for a "new mass left". 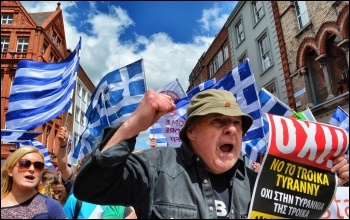 What is the mood among Greek workers and youth?

The mass of the population has not yet understood the effects of the new memorandum because the measures are not yet implemented. There is a kind of 'wait-and-see' attitude and the feeling that Tsipras 'tried his best' to fight against the Troika.

However Syriza's support is already falling in the polls. One poll, two weeks after the memorandum was signed, showed a drop of nearly 5% in its support.

At the same time, within the left wing of Syriza and among activists, there is tremendous shock. Thousands of rank-and-file members had always assured their co-workers and their periphery that Syriza would never sign anything similar to what previous governments had.

After Tsipras' retreat, thousands of activists felt betrayed and ashamed. Many of them did not dare to go out of their houses for many days or face their friends.

There is only one way not to become demoralised by events: that is to draw the correct conclusions of the defeat and take the necessary next steps.

Immediately after Tsipras signed the memorandum, we put out a call for a new mass left force. This is because of the huge vacuum on the left created by Syriza's sell-out of the 'No' vote in the referendum on 5 July, when 61.5% voted against the demands of the Troika (European Union, International Monetary Fund and European Central Bank).

Without a left alternative being put forward, massive demoralisation in society would ensue. Also, the neo-fascist Golden Dawn could present itself as the only anti-memorandum force and grow to become an extremely dangerous threat to democratic and workers' rights.

Did your call for a 'new left' find an echo among activists?

With other left activists and groups we called a public assembly in Athens on 17 July. We only had two days to mobilise for the event. Despite this, it was a very successful assembly with 250-300 people present and at least a dozen different groups represented, including from all the main left tendencies inside Syriza. This initiative is now called the '17 July Assembly'.

Syriza Youth could play an important role in the process of developing a new left. They published a statement against the memorandum and were present at the 17 July initiative meetings. In the past the youth wing was the stronghold of Tsipras, so their participation is significant.

On the other hand, unfortunately the KKE (Greek Communist Party), which would have the numbers and strength to re-arrange the map of the Greek left, refuses to be part of this process.

What is the programme of the initiative?

Through the experiences of the last five years of crisis and the Troika's draconian policies, the radical sections of the Greek left, in general, came to very similar conclusions. There is widespread basic agreement about the following points:

In what way is the '17 July Assembly' initiative linked to developments taking place within the Syriza left?

Through the initiative we are trying to establish a bridge between the left inside Syriza, the big sections of Antarsya (Anti-capitalist Left) which understand the need for united action and the building of a mass new left formation, and other forces on the left, like ourselves.

At this point of time, a pre-congress debate is opening up within Syriza. The left, particularly the Left Platform of Syriza, asked the Syriza leadership for an urgent congress to be called. Tsipras, under pressure from the Syriza rank-and-file, called a congress for September.

What will happen at the Syriza congress? Do you think a split of the party is likely?

We think that Syriza is heading for a split. If Syriza remains 'united' after Tsipras' capitulation to the Troika, this would represent a double defeat because it would mean the left of Syriza giving in to Tsipras in the name of 'party unity'.

The left inside Syriza is currently fighting to win a majority of the party to its view. This is correct. However the possibilities of achieving this are extremely weak. We call for the them to link this campaign for a majority at the coming Syriza congress with the demand of leadership change, which they have not done yet.

If the Syriza left loses, we think they should leave the party and join with the forces outside Syriza to create a new party. Such a party would immediately have enough strength to enter parliament.

Does this mean the '17 July Assembly' initiative should wait for developments inside Syriza?

We also cannot wait because there are already many voters, supporters and even members of Syriza, who are turning their back on the party. We urgently need to offer them an alternative.

Through the activity of Xekinima in the previous period, we have already established a number of such local, united left initiatives in a number of cities and areas around the country. They have attracted some of the best elements of the social movements and of class struggles, inside and outside Syriza.

These local united left alliances and the 17 July initiative are not an end in themselves but could serve as a lever to build something bigger in the near future.

Is the building of a left initiative linked to early elections?

We do not have unlimited time to develop this initiative because we will most likely have new elections in autumn. A new mass left formation must be able to take part in these elections. It is important that the left in Syriza is part of that process.

Tsipras will go for early elections in order to get rid of Syriza's left MPs. He can do so because the Greek constitution allows that. If elections take place up to 18 months after the previous elections, the parties' candidates are chosen by the leaders of these parties.

That means that early elections could probably accelerate the process of a split inside Syriza.

Is there reason to be optimistic after the latest defeat?

If we are able, in next period, to build a new mass left in Greece, on the basis of the programme mentioned earlier, which is now on the table and has some serious possibilities of success, then we can be entirely certain that the Greek working class can actually make an astonishing comeback.

Stop press: After this interview was completed, Andros, along with leading figures of many other left groups, including the Left Platform inside Syriza, issued a statement calling for a new broad anti-memorandum movement to be built and for committees to be set up in every area.