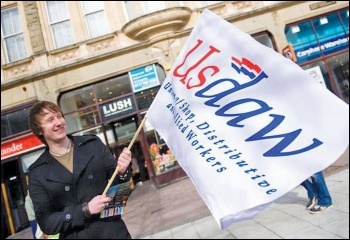 Among the vicious attacks on working class people was further deregulation of Sunday trading. At present, shops above 3,000 square feet can only open for six hours on a Sunday.

For many retail workers, Sundays are the only days they know they'll have an evening off or a later start. This is especially true given the 'flexibility' of hours supermarkets now demand.

In 2012 the government temporarily suspended Sunday trading laws for the Olympics. Shop workers' union Usdaw surveyed over 20,000 members: 77% opposed deregulation, and only 12% supported it.

Even under existing laws, workers can opt out of Sunday working restrictions. Many are pressured into doing so.

Chancellor George Osborne claims deregulation would boost the economy by £20.3 billion over the next 20 years. However, during Olympic deregulation, retail sales for August actually fell 0.4% year on year.

Tories also say they want a level playing field between online retailers and the high street. Yet many of the major stores affected have online outlets now. The main effect would be to further cannibalise smaller and independent retailers.

Osborne proposes devolving powers over opening hours to elected mayors and councils. This is clearly an attempt to shield the government from any negative consequences. But it is also a step towards regional pay and conditions, breaking up national union agreements. And if Sunday becomes a normal working day, bosses could try to end what remains of Sunday premium pay.

Given this, we should welcome Usdaw general secretary John Hannett's comment that the union "will vigorously campaign against such a proposal". However, Usdaw's leadership has a poor record on walking the walk. Hannett's fine words need to be turned into action.

As well as encouraging campaigning in stores against deregulation, Usdaw must call a national demonstration when parliament debates the new legislation. The union should mobilise members and supporters across the country - as part of a campaign to build for strike action if necessary.