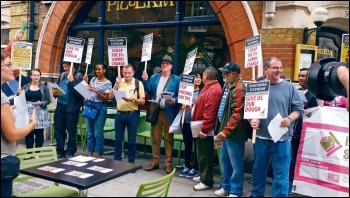 Pizza Express bosses are thieving 8% of tips paid by card. Workers at the Italian restaurant chain have held a series of protests in conjunction with general union Unite. The Socialist Party calls for an end to the larcenous "administration fee". Staff must receive their tips in full and be allowed full trade union rights.

As we go to press, radio workers at BBC Asian Network are due to strike over redundancies and job moves. Bosses have cut an editor from the Birmingham-based national station, and moved the award-winning Bobby Friction show to London. Members of the National Union of Journalists will walk out for 24 hours on 19 August.

Energy workers at EDF have suspended a 24-hour strike after management offered talks. Meter checkers, maintenance workers and office staff face job losses, and pay cuts of up to £6,000 a year. They are also fighting forced longer hours to install the new 'Smart meters' which send energy usage directly to EDF. Unite members voted by 85% for walkouts.

Delivery and warehouse workers for Indesit have four days of stoppages, plus work to rule, stored up for stingy bosses. Deliveries of fridges, washing machines and more will be disrupted as Unite members fight years of below-inflation pay deals. Workers will strike for 24 hours on 21 August and 1 September, and 48 hours from 27 August. 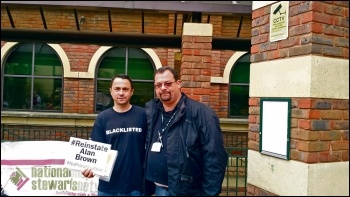 He faces trumped-up charges from a council which has cancelled almost all union organising time.

Bromley also wants to privatise over nine-tenths of its workforce.