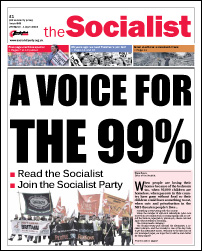 This edition of the Socialist and previous ones give a glimpse of the stormy period ahead of us. The Tories have announced they are ramping up attacks on young people and the organised working class. This autumn they will be trying to pass into law the anti-trade union bill, further attacks on benefits and more.

There is a massive need to fight back. At the same time as the attacks are being drawn up we've seen the rise of Jeremy Corbyn, showing the popularity of anti-austerity ideas. Whatever the outcome of the Labour leadership election it's clear that there are sharp turns ahead.

This shows the importance of our weekly newspaper - the Socialist. Being able to react to events quickly, offer analysis and point the way forward is vital. The production of the newspaper is the result of hard work - writing, editing and laying out articles and pictures from around the country and the world.

Our members and supporters work hard writing for a publication that reflects their life and selling the paper to their friends and workmates. And we have a full time staff working on the paper every week.

We need to spend money on printing, distribution and wages. The Socialist is a newspaper funded by working class and young people most affected by the attacks and who see the need to fight back.

To produce this paper on a regular basis, we need to have money coming in. One thing you can do to aid this is to make the simple step of subscribing to the Socialist to get it delivered direct to your door through the post each week.

So whether you are a long standing reader or this is the first issue you have read, if you would like to support our paper and receive our ideas and analysis regularly and would like to make sure you get your copy of the Socialist every week then you should subscribe via one of the methods below.

How about also taking direct debit forms (available from us) around the people you know who might subscribe?