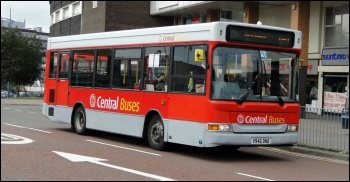 Sheffield Bus Partnership is attempting to make drastic cuts to bus services in the city. Through removing, replacing, reducing and re-routing, 10-15% of all services will be cut. 50 buses a day will be taken off the network resulting in approximately 150 bus workers losing their jobs.

The proposals are set to be implemented in October, and the lack of consultation has sparked huge anger across Sheffield with around 4,500 people voicing opposition in one form or another.

The Socialist Party and TUSC (Trade Unionist and Socialist Coalition), along with the South Yorkshire Freedom Riders and Sheffield Trades Council, have been at the forefront of campaigns against these cuts.

On 30 July, thirty people marched from the bus station to the South Yorkshire Passenger Transport Executive, forcing our way into their office and handing in TUSC petitions against the cuts.

We will also be demanding that the Labour led council, which ultimately has the final say, should halt any changes until a proper public consultation has been conducted. The 'official' consultation has been a sham with hardly any publicity and very confusing questions - you need to be a geographer to work out what's going on!

The Tory government funding cuts, passed on by the Labour council, and the drive by private bus operators First and Stagecoach to increase profits by cutting "not sustainable" services, have led to this.

That's why the Socialist Party will continue to demand that the Labour council defy Tory cuts. We call on South Yorkshire Labour councils to use existing legislation to introduce bus regulation through a Bus Quality Contract.

In the long run though, bus services should be taken out of the hands of the 'big five' private operators and returned to public ownership.

Over 25 joined a protest called by Cardiff Housing Action outside the offices of Peter Alan, which boasts that it is the biggest letting agent in Wales and charges extortionate rents. Socialist Party speakers called on the Welsh Assembly to end this rip-off and tackle the housing crisis. photo Christos Palmer