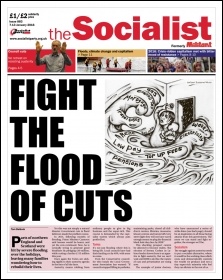 Another black man shot dead by the police

"I chose to be involved in politics, Michael Crick"

Stop the closure of Calderstones hospital!

Eleanor Marx: celebrate a life of struggle for socialism

Protesters demanding a rethink on the threatened closure of four respite and day care centres in Kent , photo by Delia Hazrati   (Click to enlarge)

Jeremy Corbyn and his supporters must fight back against the pressure from Labour's right wing to collude in a new round of savage cuts to local council services and jobs, argues Socialist Party executive committee member Clive Heemskerk.

A week before Christmas, on the last day of parliamentary business in 2015, the Communities and Local Government Secretary Greg Clark announced the 2016-17 local finance settlement, listing the exact amount of national funding each council will receive for the next financial year.

This filled out the details, at least for the coming year, of George Osborne's plan revealed in the November comprehensive spending review for a further four years of draconian austerity for local public services.

Even the Tory chair of the Local Government Association, Lord Porter, had denounced Osborne's attack. "If councils stopped filling in potholes, maintaining parks, closed all children's centres, libraries, museums, leisure centres and turned off every street light", he complained, they will still "not have saved enough money to plug the financial black hole they face by 2020".

Labour's shadow local government secretary Jon Trickett agreed the situation was "bleak" for councils and "is only set to get worse".

So it was doubly disappointing for those who hoped Jeremy Corbyn's Labour leadership victory opened up a new opportunity to resist austerity that, on the same day as the local finance settlement was announced, Corbyn issued a joint letter with Trickett and the shadow chancellor John McDonnell that, whatever its intentions were, will have the effect of undermining the anti-cuts struggle in the months ahead.

The letter, sent to the leaders of council Labour groups, did not instruct councillors to respond to the Tories' cuts in government funding by setting budgets in February and March to further slash local jobs and services. But that was how it was eagerly interpreted by the capitalist media, with a Guardian strapline proclaiming: "Re-run of 1980s defiance over cuts is ruled out".

Labour councillors across the country followed suit, using the letter to say that their approach of passing on the Tory cuts had been endorsed by Jeremy and John.

One graphic example was Manchester, a city where all 96 councillors are Labour. Local groups of the Trade Unionist and Socialist Coalition (TUSC), which the Socialist Party plays a leading role in, have been sending letters to Labour councillors since Jeremy Corbyn's victory asking for a discussion on how council cuts could now be resisted.

The Manchester TUSC letter was sent in October but it was only after the Labour group leader Richard Leese had received the circular from Jeremy Corbyn that he replied, quoting selected paragraphs from it. There are no Tories on Manchester council but Labour councillors will blame them nonetheless for the cuts they will vote through, 96 to nil!

Unfortunately, every service cut, bedroom tax eviction made or worker sacked by a Labour-controlled council will now be justified by councillors referring to the Corbyn and McDonnell letter.

This has been made possible because the letter misleadingly conflates the issue of not setting a budget at all - which would be open to immediate legal challenge - with the legal requirement that councillors have to set a 'balanced budget'.

Complying with Tory laws is not the highest duty. Jeremy Corbyn and John McDonnell are on record, rightly, as backing workers prepared to defy the anti-union laws.

The 1921 Poplar councillors fought under the banner, 'It's better to break the law than break the poor,' echoed by the Liverpool and Lambeth councillors in the 1980s. But in fact a no-cuts budget could meet the legal requirement to be 'balanced'.

This was the case with the alternative budgets that have been presented by TUSC-supporting councillors in Southampton, Hull and Leicester, and the example they were based on, the budget moved by the two Lewisham Socialist Party councillors, Ian Page and Chris Flood, in 2008.

The details differed but the budgets were 'balanced' by drawing on the councils' reserves, using the borrowing powers that councils have, and 'creative accountancy'. In fact they were models of the "innovative ways of making progress" that councils still have the powers to implement and which are praised in the Corbyn and McDonnell letter.

In each case they were legal budgets, unorthodox and not recommended by the councils' Chief Finance Officers, but budgets which could have been passed if the majority of Labour councillors had found the will to fight the cuts.

But they would only have bought time for the individual council, preventing cuts for a year or two. They could only ever be a first step in a national campaign to force the government to properly fund local public services. The possibility for that is what is being undermined by Jeremy Corbyn and John McDonnell's letter, unless they clarify their position to make it clear they still oppose Labour councils sacking workers and cutting services.

A combined campaign of Labour councils refusing to implement the cuts could defeat the government. If the total gross spending of the 100-plus Labour-controlled councils in Britain was counted as a 'gross domestic product' (GDP), they would be the eighteenth biggest country in the EU! How can it be credibly argued that they 'have no power' to resist the Tories?

George Osborne was forced to retreat after a rebellion in the House of Lords, making him claim he had found an extra £27 billion in the public finances to enable him, among other things, to drop his proposed cuts to tax credits. The Lords were stretching their 'legal powers' to overturn a government finance measure. Arguably, in fact, more so than Labour councils would be stretching their powers if they 'interpreted' those they do have in order not to make the cuts.

The issue for Labour councillors, which is what Jeremy Corbyn and John McDonnell should be stressing, is one of political choice, a determination not to carry out the capitalists' demands for austerity.

But over 90% of Labour councillors did not support Jeremy Corbyn for leader. In his latest appeal for a 'moderate fightback' the New Labour architect Peter Mandelson identified "Labour's legions in local government [as] a bigger force for sense in the party than at any time in the recent past". They are the bulwark of the counter-revolution against Jeremy Corbyn's leadership.

What is needed is the type of campaign that was mobilised to secure Jeremy Corbyn's victory, this time to take on the organised forces in the Labour Party defending the capitalist establishment, not seeking 'unity' around their pro-austerity agenda.

Party members and supporters were polled over whether or not Labour should support air strikes on Syria. Why should there not be another poll of party members - and trade unionists and local council service users facing cuts - to ask if they want to see Labour councillors implementing the cuts or resisting them?

The Socialist Party is arguing within TUSC for local groups to systematically take up the approach to Labour councillors in the run up to the council budget-making meetings in February and March to see if they are prepared to fight the cuts, as some will be. But we also fully support the position adopted by the TUSC conference in September that any politician who votes for cuts cannot expect to have a free run at the ballot box, "no matter what party label they wear". There can be no compromise on cuts.

What is the legal position?

Jeremy Corbyn and John McDonnell's letter says: "councils must set a balanced budget under the Local Government Act 1992. If this does not happen... then the council's Section 151 Officer is required to issue the council with a notice under Section 114 of the 1988 Local Government Act. Councillors are then required to take all the necessary actions in order to bring the budget back into balance.

"Failing to do so can lead to complaints against councillors under the Code of Conduct, judicial review of the council and, most significantly, government intervention by the Secretary of State".

This is an accurate summary of the legal position. But even just from a legal viewpoint it actually shows that the Tories do not have the draconian powers they are usually portrayed as having by Labour councillors seeking to excuse their refusal to fight.

Where, for example, is the power of surcharge, which timorous Labour councillors still raise and which actually was inflicted on the Liverpool and Lambeth councillors in the 1980s? As TUSC has consistently explained, it was abolished in the 2000 Local Government Act.

And equally there is no prospect of imprisonment, as the Poplar councillors were faced with in 1921. Instead today's rebels would have to confront... the councillors' code of conduct!

And even that sanction is no longer as potent as it was. Breaches of the code of conduct used to be dealt with under the Standards Board regime, which could lead to a councillor being disqualified from office for a maximum of five years. But the Standards Board was abolished by the Con-Dem's 2011 Localism Act, in a cost-cutting purge of 'quangos'. Now a complaint would have to be considered by the council itself "in any way the authority sees fit" - hardly a fearsome block to a Labour council committed to resisting the cuts.

The purge of quangos also saw the end of the Audit Commission, the body that had previously appointed District Auditors with the power to seek a judicial review of council budgets. Councils are now moving to a position similar to NHS Trusts who appoint their own auditor.

Significantly, despite almost two-thirds of English NHS Trusts predicting that they will end this financial year in deficit, the accountancy companies seeking to retain their audit contracts have issued no 'public interest reports' against them.

And lastly, there is the spectre of "government intervention by the Secretary of State," with the reserve powers to appoint commissioners to take over particular council functions. These were used most recently, in February last year, after a report found Rotherham council to be 'not fit to handle child sexual exploitation'.

Winning public support for commissioners to intervene in the Rotherham scandal is one thing. But deploying commissioners to take over Labour councils, backed by the Leader of the Opposition and mobilising popular support in a national campaign against the cuts, is another matter entirely.

No Labour councillor can credibly say 'we have no choice' but to implement the cuts. They do.

This version of this article was first posted on the Socialist Party website on 4 January 2016 and may vary slightly from the version subsequently printed in The Socialist.

Another black man shot dead by the police

"I chose to be involved in politics, Michael Crick"

Stop the closure of Calderstones hospital!

Eleanor Marx: celebrate a life of struggle for socialism