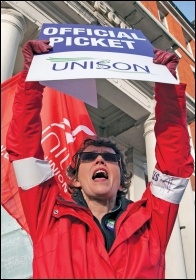 The trade union representing the majority of local government workers today called on councils not to implement the latest round of cuts to jobs and services.

The vote on Unison's local government service group executive (SGE) called on councils to use their reserves and prudential borrowing powers to plug the gap left by cuts in funding from central government.

This follows a similar vote by local government workers organised in general union Unite. Supporters of the no-cuts position see this as a temporary measure to buy time while councils build up a mass campaign to win back funding from central government to fund public services.

The move by local government unions in favour of legal no-cuts budgets comes at a time when councils are facing huge cuts in funding from central government. This year alone the cut amounts to 37% while cuts amounting to 75% are in store by 2018.

Socialist Party member Mike Forster, a member of the local government SGE from Yorkshire, moved the proposal. He said of the decision:

"This was the most serious debate of our meeting, as the executive weighed up the huge crisis facing local government workers and services.

"We need now to approach the leadership of the Labour Party, together with Unite, to demand that they join Britain's two largest public sector unions in resisting these cuts all the way."

The motion passed at the SGE:

This SGE notes that

This version of this article was first posted on the Socialist Party website on 5 February 2016 and may vary slightly from the version subsequently printed in The Socialist.