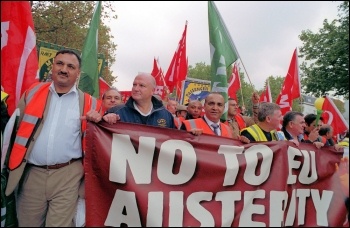 Last July Socialism Today, the monthly magazine of the Socialist Party, wrote that "after some suitable renegotiation sound and fury by Cameron", his position and that of "the main forces of capitalism in Britain and internationally" would be to support Britain's continued membership of the EU.

And 'sound and fury signifying nothing' describes precisely Cameron's 'new deal for Britain in Europe'. Most of the provisions are effectively a clarification of what is already stated in the EU treaties.

One new proposal is an 'emergency brake' to deny full in-work benefits for up to four years to workers in Britain from other EU countries. But, as The Economist magazine says, it is largely "theatre".

Just 84,000 families on tax credits would have been affected by the 'brake' if it had applied for the last four years, according to the HMRC. And they count in this one in ten of these couples with one partner who is a UK national.

The 'savings' from the brake would be minimal. They pale, for example, next to the annual €1 billion EU migrants' healthcare costs incurred by Spain, where 50% of the Britons who live there are aged over 50 and are not in work.

Cameron's deal has it that the 'emergency brake' will be activated if the leaders of the other 27 EU countries in the European Council agree that Britain's 'social and economic systems are being overwhelmed'. But who are these capitalist politicians to pass judgement, having imposed austerity across the continent, including the savagery in Greece?

Many local communities in Britain will rightly feel that public services are 'overwhelmed' when drastic cuts have been made and with another round of council cuts on the way. They need real action to defend and improve services, not Cameron's divisive play-acting.

There is palpable rage at the shortage of decent affordable housing, for example. Meanwhile the 'big nine' house-building companies hold enough land to build 600,000 new homes and sit on a £1 billion cash pile. An 'emergency brake' that really dealt with the housing crisis would mean nationalising these building monopolies and handing over their land banks to local councils to build homes.

But public ownership and other forms of state intervention are outlawed under EU treaties. Local councils, for example, have to sign off everything they do against EU state aid regulations. Cameron didn't demand that these were 'renegotiated', of course.

In that regard Labour leader Jeremy Corbyn was right in his Commons' response to Cameron to warn that the new deal's clauses on 'competitiveness' were "a fig leaf for increasing pressure to privatise our public services" and reduce workers' rights.

But he was wrong to say that to keep workers' rights "we need to remain with the EU". Doesn't what happened in Greece to the Syriza government's attempts to implement policies similar to Corbyn's prove the opposite?

The Socialist Party opposes the EU because, as Greece showed, its laws and institutions, while they ultimately could not stop a determined workers' government supported by a mass movement from carrying out socialist policies, are another hurdle to overcome. We oppose the EU, Cameron's deal included, in order to defend working class interests and take forward the fight for socialism, in Britain and Europe.

In contrast, that minority of capitalist politicians who oppose the EU eagerly participate in Cameron's renegotiation and referendum charade the better to try and divide the working class. There can be no unity with them in the trade unionist and socialist campaign that needs to be conducted for a Leave vote.