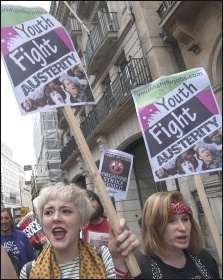 On Saturday 6 February Momentum organised its first national committee. The response of John McTernan, former Blairite advisor, was: "It's war." Well, if it is a war, and it is, then Momentum is unfortunately setting itself up for defeat.

Where was the democracy in this process? An organisation that claimed to be open, broad and, in its initial aims, "involving all those who support Jeremy Corbyn inside and outside Labour" had attempted to appoint regional delegates.

When protests came in, it then limited those who could stand to Labour members only. The details of the meeting were organised like a secret society - it was impossible for others to leaflet and discuss with delegates.

Why was it done like this? The primary purpose was to exclude the serious forces on the left, in particular the Socialist Party. Outrageously for example, Tony Mulhearn, a leader of the magnificent battle of Liverpool City Council against Thatcher's onslaught in the 1980s, was excluded from a meeting in the city.

But they will not succeed in excluding the Socialist Party and our ideas from the battle.

A report from Labour's local government conference, also held over the weekend, confirms that there is a war on between the two parties that exist within Labour. Right-winger Luke Akehurst reports that these councillors are "mad as hell with the antics of the national leadership".

This is the mountain that must be overcome - and that won't be done by an attempt to mollify the right wing.

Compare the approach of the Momentum leadership to the local government committees in the Unite and Unison trade unions. There, Socialist Party members have successfully moved resolutions that call on councils not to implement the latest round of cuts to jobs and services. This shows what is necessary - the creation of a mass vehicle for working class political representation that has been absent in Britain for nearly 30 years.

In Momentum meetings across the country, Socialist Party members have found interest and enthusiasm for the strategy of fighting council cuts - by calling on Corbynista councillors to fight for no-cuts budgets and refuse to pass on Tory austerity.

We will continue to put forward such a strategy, in Momentum meetings and elsewhere. If Jeremy Corbyn, John McDonnell and Momentum were pursuing this energetically it would bring millions of people to the party as fighters.

But the Momentum leadership has issued no serious strategy to rally the millions angry about austerity into action.

The situation of two parties in one cannot continue indefinitely. Will a new anti-austerity party come from Corbyn and McDonnell leading a fight that can force out the Blairite rump from Labour? Or will the enthusiastic Corbynistas, without a clear lead, give up on the idea that Labour is the vehicle for their struggle?

The movement against the bombing of Syria gave a glimpse of the potential if a clear appeal was made to the working class and the youth to fight the right. Around 70,000 people contacted their MPs at Jeremy's request to demand a No vote to the Tories' warmongering.

This was not an exclusively Labour Party event by any means - for example in Walthamstow Socialist Party members joined with others inside and outside Labour to march on local MP Stella Creasy's office and demand a No vote.

As a result of this pressure, four times more Labour MPs voted with Jeremy Corbyn than had nominated him to stand for leader.

The 66 Red Tories who sided with Cameron faced calls of deselection from angry young people and workers, with Socialist Party members making the call on TV in the face of vicious attacks from the right wingers in Labour and the media.

We warned that this odium was as nothing compared to how the right wing would attempt to crush any serious moves to curb the interests of the 1%, such as nationalisation of the energy companies, an end to the anti-trade union laws or the scrapping of student fees.

Instead of readying the troops for future battles, unfortunately, the leadership of Momentum when faced with attacks chose to abandon the call for re-selection and attacked the Socialist Party for raising it.

The primary task for the left is to mobilise the millions who could be drawn to a militant anti-austerity banner and the building of a political organisation that can give it a voice. The Momentum leadership's decisions show it is not at all prepared for this struggle.