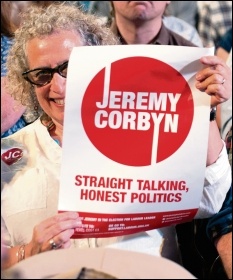 In January I received an email from 'Team Momentum' inviting me to its new North Birmingham group's inaugural meeting on 1 February.

I was invited to help to "grow our movement for a more equal, democratic and decent society." As a previous Trade Unionist and Socialist Coalition (TUSC) parliamentary candidate for the area I duly attended, looking forward to positively engaging with supporters of Jeremy Corbyn and other socialists.

However 20 minutes later I was walking back to my car. Why? I'd been told to leave because I was a member of the Socialist Party.

The chair announced that Momentum HQ had issued a set of rules for local groups, one of which was to bar members of other political parties, specifically mentioning the Socialist Party, from Momentum meetings.

The first casualty was 72-year-old Zarina Bhatia, an ex-Labour Party member who'd resigned in 2003 over the war in Iraq, now a member of Left Unity. She raised her hand to ask if she should leave the meeting on account of this ruling. The chair said that he thought that would be "for the best". She protested, gathered her things, and left. I couldn't believe what I was seeing.

The chair asked if anyone else was in any other parties, I identified myself and was then told that I must leave the meeting. I protested but the chair said they must comply with the national rules and that if I wanted to stay I should join Labour.

I said that that I wouldn't be allowed to join Labour even if I wanted to but that I, and the Socialist Party, support Jeremy Corbyn. I said that it was crazy for Momentum to exclude fellow socialists from a meeting of anti-austerity campaigners and that we should collaborate and fight to make Jeremy's policies a reality.

If Momentum is to be a success it needs to throw its doors open to all those who want to fight austerity, not just Labour Party members. It should be putting its energy into kicking out the careerists and the Blairites, not the socialists.