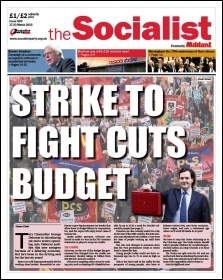 Striking to save sixth form colleges

Doctors out in force for third phase of action

A day in the life of a painter and decorator

Brave junior doctors are an inspiration to us all - now, the trade union movement must come to their support.

Members of doctors' union BMA have so far struck on three occasions to defend the NHS. They plan at least two more stoppages. The Tories have made a new enemy, with punishing schedules and cuts to pay normally reserved for other workers.

Healthcare has so crumbled that we might not even meet the World Health Organisation's definition of a national health service. Increasingly, the capitalist state is reducing its legal obligation to provide care. At the same time, it is selling off its facility to do so to unaccountable privateers.

Meanwhile, a recent BMA poll of 2,800 GPs' surgeries found 294 reporting they were "financially unsustainable". 46% expect to lose doctors to retirement or emigration. Across the NHS, thousands of junior doctors have applied to get out - and who can blame them?

But Health Secretary Jeremy Hunt's bullying imposition of the contract shows weakness, not strength. He knows the doctors are united and the public is against him. Now is the time for other unions to join the fight and hit the Tories while they are weak.

Britain's largest trade unions, Unite and Unison, both represent big sections of health workers. Their members have a litany of potential industrial disputes - not least the latest 1% pay deal. So do workers across the public sector.

Other unions should ballot for action now. They can then coordinate strikes with the junior doctors. This will prevent the doctors from becoming isolated, and allow other sections of the workforce to exploit an opportunity to push the Tories back.

The BMA is not yet a member of the Trade Union Congress (TUC). The Socialist says it should have a standing invite to the TUC's general council while the dispute runs.

We urgently need an emergency national demonstration to support the BMA and the junior doctors. The Socialist calls on the TUC to approach the People's Assembly about turning its 16 April march into a TUC and union-led demonstration to defend the NHS.

Striking to save sixth form colleges

Doctors out in force for third phase of action

A day in the life of a painter and decorator