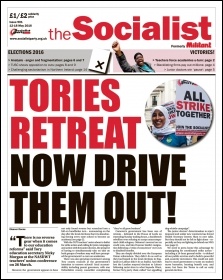 This is an open letter to Momentum in the wake of the latest attacks on Labour's left wing.

Labour's suspension of Momentum steering group member Jacqueline Walker is clearly an attack on the anti-austerity policies that Jeremy Corbyn represents. Subsequently, the working class and the left must be mobilised to defend Jacqueline, and demand that her unfounded suspension from the Labour Party is rescinded.

Witch hunts by the right-wing pro-capitalists within the labour and trade union movement are not a new development nationally or locally. Indeed, three members of Folkestone and Hythe Labour Party - myself included - were expelled in 1991.

This was due to the successful campaign against Thatcher's infamous 'poll tax' that we, supporters of Militant (forerunner of the Socialist Party), led both nationally and across Kent.

Our crime, as Militant supporters, as far as the right wing was concerned, was that we were better organised than it was.

So they used the bureaucracy to expel us. Some on the left kept their heads down and said nothing to defend us during that period.

However, the recent election of Jeremy Corbyn should give us the new and welcome opportunity to build a mass, working class, anti-austerity party.

It is clear that the Labour Party has become two parties pulling in opposite directions. The recent council, regional and mayoral elections indicate that a slow coup is developing against Jeremy Corbyn's leadership.

Experience has shown that for us to be successful in fighting off the Blairites and in building a mass, anti-austerity movement which would in turn cut across nascent racism, there must be unity on the left, inside and outside the Labour Party. The campaign to rescind the suspension of Jacqueline Walker offers us the opportunity to begin to build such a movement, without exclusion of socialists.

I would like to propose that we organise a public meeting in the area covered by South East Kent Momentum. We could invite Jacqueline and others on the left - including Momentum, the Socialist Party and left Greens - to speak in particular in defence of Jacqueline, and in general on the anti-austerity policies that Jeremy Corbyn represents. 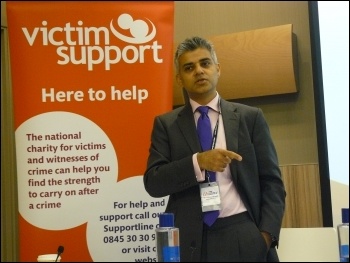 I am a bus driver. I live in a south London council flat. Like Sadiq Khan's dad, reputedly. The new mayor recalls his family's humble roots. Let's see if he remembers his promises to London's workers.

Why does he bang on about his modest background? Because voters don't trust career politicians wedded to austerity.

Sadiq's already using his position to attack Jeremy Corbyn. We need leaders who are rooted genuinely in the working class, not politicians with selective memories.

It felt like the whole world's media was in Leicester on 2 May, waiting to see if Leicester City FC was going to win the Premier League. Everyone loves a rags-to-riches story - the underdog winning against all odds.

For those bearing the brunt of austerity, this is especially true. It gives hope - maybe false hope, but who cares; we can dream. It has temporarily lifted the burdens of everyday struggles from people's lives.

There are lessons we can take from this amazing triumph. Teamwork is better than eleven individuals playing for themselves, and good leadership is vital.

Unfortunately, Labour-led Leicester City Council represents none of those things.

Money will come into Leicester on the back of winning the Premier League, but it will be big business that will benefit. I doubt the people of Leicester will go from rags to riches on that basis.

The workers' movement in Leicester, across Britain and around the world needs to get rid of the capitalists and their politicians to write our own historic triumph.

At a time when some on the left seem to be falling into the trap of calling all Israelis 'Zionists' and exploiters, it seems they could learn from some recent journalistic research.

In Israel, 45,000 people who survived the Nazi genocide live below the poverty line. In 2014, one in five was forced to choose between medicine and food.

Holocaust survivors who arrived in Israel before 1953 the Israeli state provides for - but if it was after that, date they go to the 'Claims Conference', based in New York. This has, since World War Two, been tasked with distributing tens of billions of dollars from Germany to survivors all over the world. 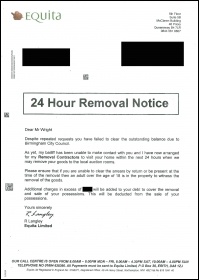 David Wright's letter from the baliffs   (Click to enlarge)

I'm a subscriber to your paper but not a Socialist Party member. I stood for the Trade Unionist and Socialist Coalition in Hall Green, Birmingham.

Many people say we shouldn't stand against Labour candidates. This letter from my council (see pic) shows why we should.

As an unemployed Brummie, I was more than prepared to pay at the unemployed rate - but no. First they sent me letters for the full amount, and then they set this lot on me. I've been getting these for two years now.

Birmingham is a Labour-run council, and as long as they behave like Tories I think we have every right to stand against them.