Protest against closure of vital heart unit in Leicester 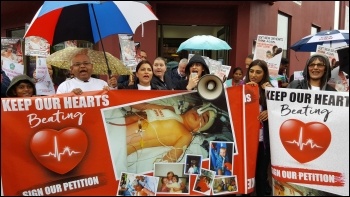 The protest, including Ria Pahwa with megaphone photo Steve Score   (Click to enlarge)

The NHS is in crisis and there can be little doubt that it is all because our government refuses to fund it properly.

Estimates suggest there will be a £22 billion funding gap by 2020, while current proposed cuts already mean that local hospitals face losing £451 million from their annual budget, with the threatened closure of the A&E at Leicester General Hospital looming on the horizon.

As part of this ongoing programme of cuts, NHS England is presently attempting to close down three heart units across the country - one in Leicester, one in London, and another in Manchester.

Government officials tasked with stealing our services try to dress up their attacks as help, saying they will improve service provision. But everyone can see through this shallow lie.

On 10 September, over a hundred people marched up and down Belgrave Road for over an hour demanding that the government leave our city's vital heart unit at Glenfield hospital alone.

Sadly, this is not the first time that the people of Leicester have had to fight to save Glenfield heart unit. The protest was organised by 18-year-old Ria Pahwa, who had organised an identical protest almost exactly four years ago. In that instance the popular campaign to oppose the closure of Leicester's heart unit repelled the government's attack, and so yet again we must make sure we succeed.

Like last time round, the so-called consultation is attempting to pit different heart units against each other. Therefore, it is clear that to be successful the campaign must continue to oppose the closure of any heart units. The NHS must be taken out of the hands of private profiteers and completely renationalised as a more lasting solution. In this way our health services can be funded properly, and allowed to grow, not shrink.

We distributed leaflets advertising a public meeting on 24 September at the Leicester Adult Education Centre, LE1 6HL from 2pm to 4pm. This will then be used as a stepping stone to building for a rally in Leicester on 29 October to make sure that the government gets the message that the people of Leicester will not take its brutal cuts agenda laying down!