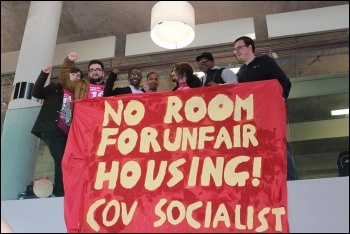 It's no secret that London house prices and living costs are unaffordable for most working class people. It's also no secret that students have been hammered by successive governments, which have increased tuition fees and axed maintenance grants.

It is of no surprise then that this situation has pushed students at University College London (UCL) to the edge, causing them to organise a rent strike to fight the unaffordable costs of student accommodation.

Student anger was so strong at UCL that over 1,000 students responded to the strike organised by Cut the Rent, which, after a five-month battle, won rent freezes and concessions worth over £1 million. However, the group says that this isn't the end of the campaign and plan to continue fighting for affordable student accommodation.

This successful example of a rent strike has the potential to influence other students to use similar tactics in the future. With the Tories' continuing austerity cuts, student anger is bound to increase.

The National Union of Students (NUS) has said that it would support and give advice to student groups that are looking to take similar actions to UCL students, with the vice principal for welfare expressing her pride for standing alongside the London strikers.

Rent rises rarely, if ever, translate into improved housing. Instead, student accommodation has become a profitable market for companies - like Unite Students, which makes money from squeezing large chunks out of students' maintenance loans.

At York University Socialist Students won a massive victory in gaining a not-for-profit letting agency run by their student union - proving it is possible to provide student accommodation which doesn't just line the pockets of unscrupulous landlords and rogue letting agencies.

The problems students face over housing also impact on wider working class communities. The massive profits landlords can make by renting single rooms to students means that rents have also risen for ordinary families, who can't afford to buy a house.

This has led to families being pushed out of their homes with those houses then being converted to rent for students. Understandably, in areas like Coventry with a big student population, some local residents feel animosity towards students who they blame for the actions of landlords.

However, by actively campaigning on these issues like the UCL students and Socialist Students have done, students can raise awareness of their housing problems. By working with local residents groups, students and workers could get organised and force universities or local authorities to take action.

The Socialist Party calls for a mass house building scheme to tackle the misery working class people have in finding a home. We support Jeremy Corbyn's attacks on the Tories' abysmal house building record and his call for rent control.