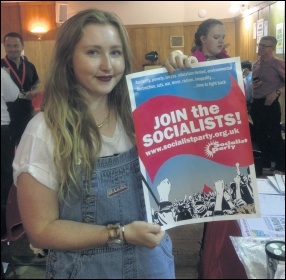 I've always been into politics, as are my parents who I have political discussions with. My mum is an NHS nurse and she would tell me about how understaffed they were and how private companies were buying it, not to help people but to make money.

I did some research and saw how much inequality there is in Britain and across the world. I started to talk about it at school and have debates with my friends and teachers.

It was the attacks on education and teachers by former Tory minister Michael Gove that made me see first-hand the effects of capitalism and austerity. This encouraged me to find out more and fight back. I came across the Socialist Party at an anti-TTIP (proposed US/EU trade deal) demonstration and gave my contact details.

I was really interested in the Trade Unionist and Socialist Coalition and how the Socialist Party was actively involved in putting across a socialist alternative.

After helping out on a few Socialist Party stalls and campaigning for the junior doctors and against Sports Direct's exploitative practices I decided that the Socialist Party was the right party for bringing about change.