And kick the Blairites out of Corbyn's Labour 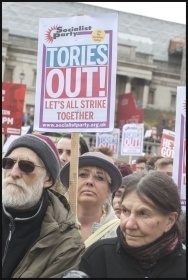 Tory delegates recently convened in Birmingham for their annual conference - to discuss how best to put the boot into the working class, while improving the lot of the super-rich and big business.

Unelected Prime Minister Theresa May provided warm words about helping struggling families, yet her government will plough on with austerity and cuts to public services.

After his predecessor's failure to meet his own economic targets, Chancellor Phillip Hammond ditched the Tory commitment to a budget surplus by 2020. But of course he refused to condemn the harsh austerity of the previous term that has seen increased hardships for millions across the country.

And while the Tories are united in their unwavering commitment to austerity, there is less consensus on the direction the UK should take post-Brexit. Theresa May played to the Tories' majority Eurosceptic membership by promising that in forthcoming negotiations her priority would be ensuring that the UK could impose even harsher attacks on migrants than the EU does! The subsequent fall in the pound will only add to their crisis.

A swathe of Tory MPs have since expressed concerns over what a 'hard Brexit' would mean for the UK's relationship with the EU as a trading partner. Some go further in undermining May - like Scottish Tory leader Ruth Davidson. Dismissing the public will shown in the referendum, she insisted that a deal keeping the UK within the single market is both possible and preferable.

Meanwhile thousands of people gathered on the streets of Birmingham to protest against austerity - many inspired by re-elected Labour leader Jeremy Corbyn's anti-austerity programme and his victory against right-wing plotters in the party.

The Tories are divided, led by a prime minister with no mandate, holding a majority of just 12 seats. A mass movement can bring down this vicious government, and their Blairite shadows, so that we can build a better future geared towards the needs of the many, not the profits of a few.