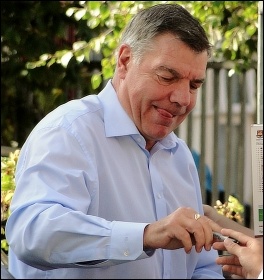 "Big Sam likes a bung," or so the chant goes - seemingly with good reason, if the latest reports of corruption are anything to go by.

Sam Allardyce has been sacked as England football manager after an undercover sting by journalists for the Telegraph. He was caught on camera negotiating a £400,000 fee seemingly to help businessmen circumvent inadequate rules on player transfers set by the FA, English football's governing body.

Third-party ownership of players' economic rights is a method agents and businesses use to extract additional money from the game without contributing to it. The third party 'owns' a portion of the player, and receives a fee when that player is transferred, as well as taking deductions from their wages.

This has allowed heavily indebted clubs to access players they otherwise could not afford. But Michael Platini, ex-president of European football administrator Uefa, has described the practice as a "form of modern-day slavery".

It incentivises the third party to trade players like cattle, as frequently as possible, for maximum fees. It undermines the autonomy of clubs to make footballing decisions, and harms players' development. Consequently, both the FA and world football body Fifa have banned it after repeated scandals.

This is not the first time Allardyce's off-pitch dealings have come into question. He and his son, a football agent, both faced accusations of dealing in illicit payments when transferring players, following a BBC investigation in 2006.

This is just one symptom of a game run by crooked owners at every level. It raises the question, though: why did the FA appoint him?

The Socialist Party says: kick out the money men ruining football. Bring the clubs into collective ownership under the democratic control of fans, players and the community. Slash ticket prices, and invest the sport's enormous profits in grassroots and youth football.