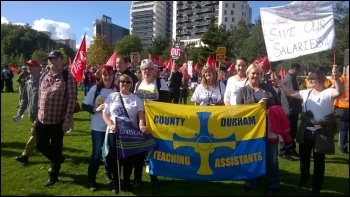 Teaching assistants (TAs) in Durham are furious at the Labour council's plans to 'chop and drop' them. If these proposals go ahead 2,700 TA's will be sacked, then rehired on 23% less pay as they will only be paid during term time.

The same council which is intent on slashing TAs wages was ridiculed by David Cameron for shamefully paying senior councillors thousands in a special clothing allowance.

Unison members, who make up the bulk of the TAs, voted to reject a compensation deal - which offers compensation for two years, instead of one. Belatedly Unison is now to launch a ballot for strike action.

The predominantly women TAs have packed out recent meetings to defend their terms and conditions. At these meetings it is clear that alongside fury at the Labour council, there is also anger at their unions who have 'dragged their feet'. TAs feel they are fighting on two fronts - against the council and their unions.

Disgracefully, no Unison or GMB officials who are overseeing this dispute attended these grassroots meetings. However, the campaign has gained the support of Jeremy Corbyn, who gave the stark warning to Durham City Council to 'get this sorted'.

The TAs under attack have laid out why they cannot accept this massive pay cut when they are already poorly paid. Already one TA has sold her home as she feared she would no longer be able to keep up her mortgage payments. Others have said if these plans go ahead they will be forced to give up the job they love and look for alternative employment.

However, it is clear the Durham TAs are prepared to fight - messages of support can be sent to: spartacusannie@gmail.com and to contribute to the Durham TAs' fund visit: www.justgiving.com/crowdfunding/CountyDurhamTeachingAssistants