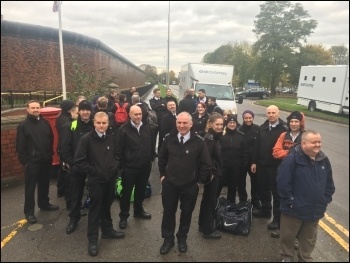 The last issue of the Socialist published an article by a prison officer detailing the reasons for the crisis in the prisons and calling for action. On 15 November action was taken. Thousands of prison officers up and down the country walked out of their workplaces taking unofficial strike action.

This is over cuts and privatisation that has led to increasing deaths in custody including homicides, incidents of self-harm and assaults among prisoners plus a 43% rise in assaults on staff in the last year.

The Socialist was snapped up at Wormwood Scrubs by prison officers eager to read the article by one of their own - one bought the paper for £10. Rob Williams, NSSN national chair, addressed the picket line bringing solidarity. Prison officers were handed a letter by management threatening them with disciplinary action for walking out which is a legal right of any employee.

The government has also threatened legal action. Prison officers have been denied their right to strike since 1994.

Around 50 prison officers picketed the prison at Wetherby, Yorkshire, which has been heavily affected by inter-prisoner violence. Staff there told Socialist Party member Iain Dalton that while young offenders' institutes had been spared the worst effects of the cuts compared to the rest of the prison estate, they still had the same problems of not having enough staff to properly supervise prisoners.

The POA union of prison officers and allied workers has said as many as 10,000 officers took part in the walkout which follows previous unofficial action at branches like Holme House, Wetherby and Wormwood Scrubs.

POA general secretary Steve Gillan said: "The POA has consistently raised the volatile and dangerous state of prisons, as chronic staff shortages and impoverished regimes has resulted in staff no longer being safe."

This version of this article was first posted on the Socialist Party website on 15 November 2016 and may vary slightly from the version subsequently printed in The Socialist.