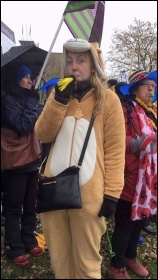 The action disrupted over 100 schools and closed 43 completely. Schools were picketed and strikers were joined by parents and members of the other teaching unions.

On the second morning of the strike 1,000 teaching assistants descended on county hall. The staff lined the street and received massive support from passing commuters.

At 12 noon the teaching assistants rallied at Durham Miners HQ. The hall was packed with standing room only as approximately 1,200 strikers and supporters sang and cheered. They also listened to speeches from Unison general secretary Dave Prentis and Lisa Turnbull from the Teaching Assistants Activist Committee.

The strike was called after pressure from teaching assistants who have had to organise their own campaign to force Unison into action. Durham County Council has started the process to sack all 2,700 teaching assistants and re-engage them on term-time contracts that could cut their pay by up to 23%.

The Labour council claims it has no alternative because it could face equal pay claims because of the teaching assistants' non-standard contract that pays them for 52 weeks a year and time not worked.

Teaching assistants in Durham are paid several thousand pounds a year less than TAs in neighbouring authorities. These authorities pay all their TAs in accordance with single-status conditions. Yet Durham Labour council is proposing to cut their pay by up to another £4,600 a year and intends to impose the new contract in January after TAs rejected an offer of two years compensation.

Unison has been slow to take action to support its TAs. The TAs have had to organise themselves and Unison's officers were originally hostile to their unofficial organising committee, even trying to block and delay them from becoming accredited stewards. The TAs are now fighting to democratise Unison to ensure it fights for them.

They are determined not to accept any pay cut and are seeking re-grading to bring them into line with TAs in other authorities. Additional days of strike have been called but the dates have yet to be confirmed.