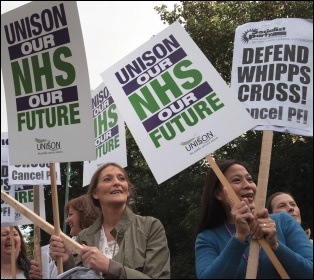 NHS England has secret plans for closing A&Es and even a whole hospital, according to an investigation by the King's Fund think-tank.

NHS England has told local health managers not to reveal plans or engage with the public, instead relying on an expensive team of management consultants to organise the restructuring.

Leaks show that Merseyside alone plans to 'merge' four hospitals to cover a £1 billion shortfall. This is all in order to close the huge funding deficit of the NHS - £2.45 billion just this year.

This deficit comes from a steady decrease in government funding, as well as the outrageous costs of the 'internal market' system, and 'PFI' financing. Scrapping PFI and creating a truly nationalised health service would cut out the need for competing health providers, saving billions leeched off by the private sector.

The recent wave of spending reviews have been misnamed 'sustainability and transformation plans' (STPs). When translated from Tory to English, that means further privatisation and spending cuts.

This is to justify lucrative sell-offs like the recent £700 million NHS contract for Virgin Care. The public outrage contracts like this provoke meant NHS England specially advised its managers on how to block Freedom of Information requests on STPs.

A fully publicly owned NHS under democratic workers' control and management would have no room for scheming management teams.

The government hopes that by hiding spending cuts, it can stop burgeoning grassroots campaigns from gaining traction. Campaigns like #HandsOffHRI in Huddersfield, which the Socialist Party has played a key role in.

Earlier this year, #HandsOffHRI mobilised the biggest demonstration Huddersfield has seen since 1918. We link essential campaigning like this across the country to the need for an anti-austerity mass workers' party based on socialist policies.