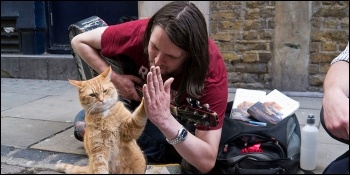 'A Street Cat Named Bob' is the heart-warming story of a man trying to beat addiction and homelessness with the support of his pet cat. It is based on a true story, and while on the surface it may appear to be a film about a cute cat, at its heart it deals with serious issues in capitalist society.

Government figures say there are thousands of people sleeping on the streets every night, and these figures are increasing every year. The film shows a drug addiction counsellor trying to get a client put into emergency housing so he has a safe environment to live in while attempting to stop taking drugs.

However, the stigma around drug users means he is nearly turned away, as he is seen as less 'deserving' of a home than others. Emergency housing is in short supply, and young families are often in dire need of shelter. But this doesn't mean addicts and other impoverished people do not deserve a basic standard of living too. A socialist programme of mass home building could satisfy both.

Stigma around drug users features heavily in the film. It also shows the difficulties faced by the families of addicts.

UK drug laws mean that even possession of a drug can lead to multiple years of imprisonment, which can put people off looking for help getting clean. The criminalisation of drug use also means there is no regulated, safe way to obtain drugs, leading to even greater risks from using.

Methadone treatment, which is depicted in the film, is a step towards a safe method to quit taking drugs. However, the treatment can be expensive. And so, with ongoing cuts to the NHS, drug users may similarly start being seen as 'unworthy' of NHS treatment.

Socialists must fight cuts and the stigma around addiction. Addicts should be treated as victims, not criminals.

Invest in genuinely affordable housing for all, and fight for a fully funded, publicly owned NHS. We link this to the need for a socialist economic plan - to end poverty, so everyone in society can have food, water and shelter, and a decent, fulfilling life.