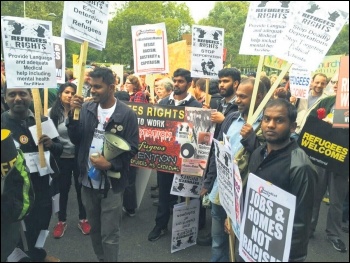 A Freedom of Information request showed that out of an estimated 7,500 detainees over three months, 218 were on hunger strike. 109 had attempted suicide, with 649 on suicide watch.

Capitalist wars and economic turmoil have created an unprecedented refugee crisis, with 65.3 million people forced from their homes, over ten million under 18.

This human catastrophe has seen right-wing governments hypocritically scapegoat immigration as the source of shortages in housing, health and education. Meanwhile, their friends in business exploit migrants for cheap labour to boost their profits.

Far from being a refuge for those fleeing war and poverty, British governments have used increasingly draconian powers including refused entry, detention and forced removal.

The Socialist Party stands clearly for the right to asylum and an end to racist immigration laws. Over half the removals in 2015 were to Asian countries. Detention centres should be closed down immediately.

The plight of refugees and migrant workers is a product of the same economic crisis impacting the lives of working and middle class people in Britain. A united campaign to end austerity, led by Jeremy Corbyn and the trade unions, linked to a socialist programme for housing and public works, could cut across the racist poison pedalled by pro-capitalist politicians.

The continued wars in the Middle East supported by the Tory government and their Blairite allies in parliament must be opposed. So too must the arms deals with dictatorial regimes such as Saudi Arabia, carrying out its murderous war in Yemen.

The appalling crisis in British detention centres exposes the fading liberal façade of British capitalism. The horror of the capitalist crisis experienced by millions around the world condemns this system.

It is the task of socialists to show there is a way out through the mass struggle of the working class in Britain and internationally, for a new world society that works for the 99%. Where the huge wealth and resources of society, in public ownership, could be planned to meet the needs of all, to end war and poverty.