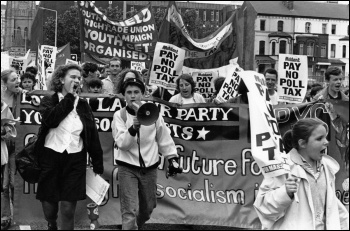 I've been asked why socialists like me should be readmitted to the Labour Party now Jeremy Corbyn has been elected leader.

I became involved in the campaign to save the local hospital in the 1970s, and local left-wing councillors invited me to join the Labour Party. I subsequently became a supporter of Militant, a Marxist newspaper which organised to defend socialist ideas in Labour.

I became the Labour Party youth officer in Folkestone, and we had one of the largest and most active branches of the Labour Party Young Socialists in the South East. This was true wherever Militant supporters took the lead.

We stood shoulder to shoulder with workers on strike. We built support for Liverpool's socialist Labour council, which won tens of millions back from Thatcher, creating thousands of homes and jobs.

Together with other socialists, I campaigned in Brighton Kemptown for Labour's Militant-supporting parliamentary candidate Rod Fitch, under the banner of 'a workers' MP on a worker's wage'.

Our campaign did not win the seat - but it was the only constituency in the south to hold the Labour vote. Liverpool and Brighton Kemptown cut across the lie that socialist policies don't win votes!

We organised and campaigned to build support for the miners in their 1984-85 strike. The Kent branch of the National Union of Mineworkers sent me to Holland and Belgium to resolve problems that arose concerning picketing.

We built local, national and international support for seafarers during the bitter P&O dispute. We drew attention to the weak and ineffective national - and, with some honourable exceptions, local - leadership of the National Union of Seamen.

During the campaign to build mass opposition to Thatcher's poll tax, which Militant organised and helped lead nationally, I was elected as secretary of the Kent Anti-Poll Tax Federation. The Folkestone anti-poll tax union alone had a membership of 2,400.

I was one of the 34 Militant supporters imprisoned for refusing to pay the poll tax, and was sacked a few weeks after coming out of prison.

I had to retrain, and studied law. I worked for ten years in criminal law, then ten years at the Refugee Legal Centre, and became senior shop steward. We fought hard during those 20 years to defend against the continual and conscious cuts to legal aid by successive New Labour and Tory governments.

The South East Kent Trades Union Council, of which I am secretary, was set up with the support of the late Bob Crow of transport union RMT. We have built a strong, campaigning, autonomous and vocal trades council.

We have campaigned in defence of Sure Start centres, care and respite centres, traffic control at schools; for workers' rights at Sports Direct, for a £10 an hour minimum wage, to unionise Saga; and most recently, the magnificent campaign to defend Pent Valley School.

It's time for all socialists to stand up and be counted. This is not the time for compromise and 'partnership', but for bold, clearly defined socialist policies, carried out by determined representatives of our class.