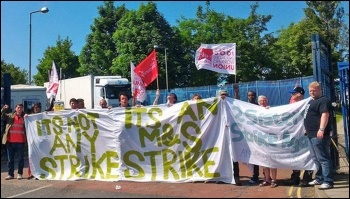 Sheffield is the city region with the highest proportion of people on low incomes. Between 2010 and 2014, Sheffield's average wage was £50 a week lower than the UK average.

When the misnamed government 'National Living Wage' was introduced in April, it was estimated that 28% of the city's workforce would get a pay rise by 2020, more than in any other large city and twice as many as in London.

That's why Sheffield Trades Council, on the initiative of the bakers' union BFAWU and with the support of Unite, GMB and Usdaw trade unions, has launched its Sheffield Needs A Pay Rise (Snap) campaign and is building for a demonstration in the city on 17 December.

With the Institute for Fiscal Studies (IFS) reporting that average wages in the UK will be lower in 2021 than they were in 2008, Sheffield's Snap campaigns to end zero-hour contracts, for a £10 an hour minimum wage and recruiting people to trade unions. It is generating an enthusiastic response from local trade unionists and unorganised workers alike.

Over 200 attended the Snap launch meeting last month, held while Veolia bin workers were taking strike action for a pay rise. Since then, volunteers have been touring stores and shops in the city's high streets to map out the area and introduce the campaign to mainly young and almost always non-unionised workers.

Gareth Lane from the bakers' union explained the enthusiastic response from two stores. At a women's fashion store, the manageress said that workers already knew about the demo and had been discussing it on their internal email.

At Iceland, leaflets were eagerly taken by staff who promised that while half of them would be working on the day of the demo, they'd make sure that the other half were all there.

New shop steward Florin said: "Our campaign on the Pennine site has had excellent feedback, very positive and enthusiastic from most of our workers. Monika [another steward] is doing a great job discussing with people, especially with the Polish and Slovakian workers. And I'm trying to bring our Romanian community from Sheffield and surrounding areas onto this demonstration."

The recent victories of Deilveroo and Uber workers in London shows the potential for low paid workers to get organised and win pay rises. The Sheffield campaign is tapping into that mood and is the sort of action that should be rolled out by trade unions across the country.